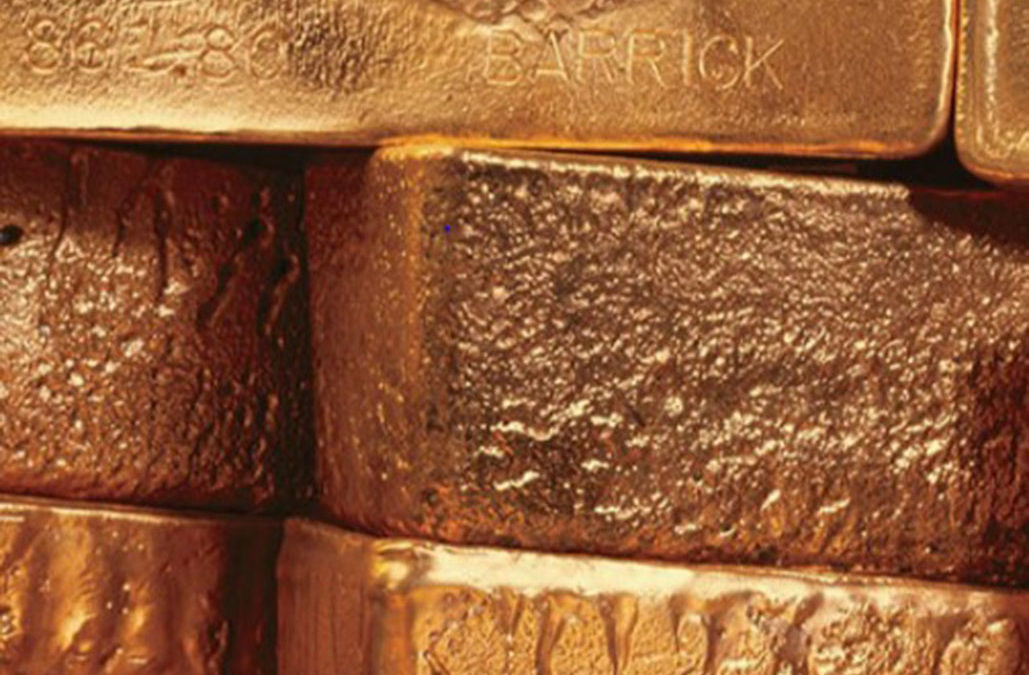 Area plays, where one company makes a discovery then other companies rush in to stake ground nearby, are at the very foundation of junior resource markets. Noteworthy Canadian area plays include Hemlo in 1982, Eskay Creek in 1990, Lac de Gras in 1992, Voisey’s Bay in 1995 and the Yukon’s White Gold Rush in 2010.

The latest area play to capture the imaginations of gold investors is taking place in Central Newfoundland – the Exploits Gold Belt Area Play.

New Found Gold’s (TSXV:NFG) blockbuster discovery at its Queensway project in 2019 unleashed a flood of financing to Newfoundland gold explorers, and kicked off a series of exploration programs across the province’s mineral belts.

As the results from recently initiated drill programs start rolling in, there is little doubt that Central Newfoundland can deliver world-class deposits from its remarkable structural setting.

The Exploits Gold Belt Area Play may be one of the most deep seated structurally prepared environments on the planet. During a period known as the Taconic orogeny that lasted from 480-430 million years ago, the continental plates of Laurentia and Gondwana collided, closing the body of water between them called the Iapetus Ocean. The islands we now know as Newfoundland, Ireland and Great Britain, were crushed between the continental plates, and deep crustal breaks that remained as active fluid conduits for millions of years were created. The image below shows the five major tectonic breaks that have been traced back to their origins over 400 million years ago, and are identifiable across the continents for thousands of kilometers. 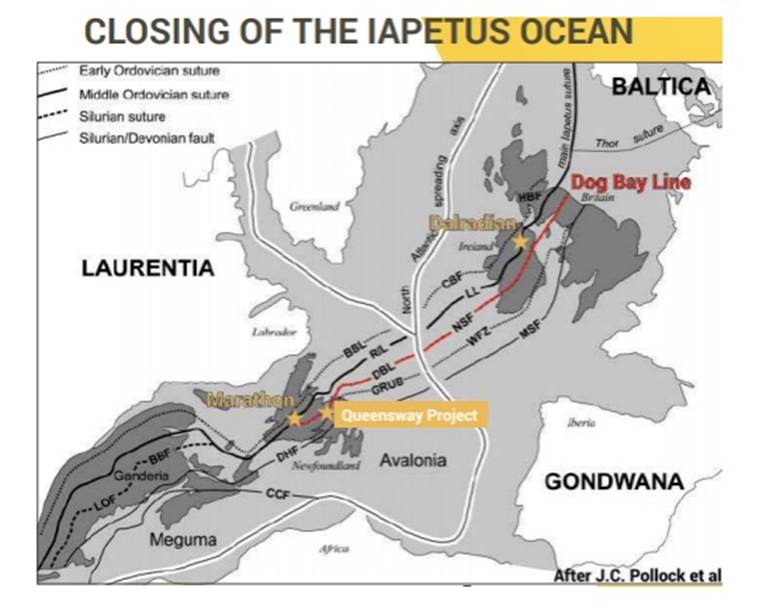 The Exploits Subzone and GRUB regions have been the focus of major staking and financing throughout 2020, with increased exploration activities forecasted in the area, moving into 2021.

Most gold properties overlie one of the deep-seated structures Newfoundland is famous for, and have a secondary structure, like an anticline, splay or sub-splay, that provides a trap for the gold mineralization.

A very impressive +$31 million raise on New Found Gold’s listing in August set the stage for an aggressive 100,000-meter drill program to reveal the true value of the discovery that lies within NFG’s Queensway project in the Exploits Gold Belt Area Play . The company now has about $75 million in its treasury with which to continue and expand exploration at Queensway.

The 1,500-square kilometer property is located on the Trans-Canada Highway 15 km west of Gander, NL.

Diamond drilling is currently focused on a 5-km trend along the Appleton Fault. Following completion of the initial six holes at the Little/Powerline target, the first drill was moved to the Lotto zone, and a second drill began at the Keats zone on Sept. 8, to follow up on the 2019 discovery intercept. An initial 12,000m of drilling is planned at Keats.

But what the market was really waiting for, were results from the Keats zone, and they did not disappoint.  On Oct. 27 the assays came back from the first four holes, all drilled as part of a 10m step-out from the monster discovery hole. The idea was to establish the geometry and orientation of the veins making up the high-grade gold system.

Intervals from these holes, which displayed quartz veining, sulfide mineralization and visible gold, were assayed and returned the following results: 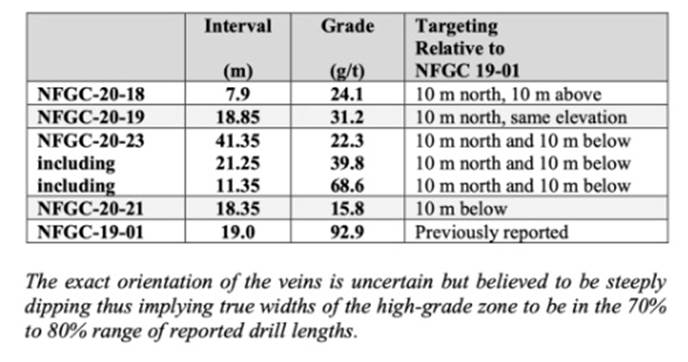 The market is responding very well to New Found Gold; indeed it is one of the most closely watched stocks in what has been one ripper of a summer for gold exploration, motivated by a record-high surge in the gold price to beyond $2,000 an ounce. Year to date, NFG has more than doubled its share price including gains of about $0.75 this week following publication of the drill results at Keats.

Comparisons are being made to Newmarket Gold’s Fosterville project in Australia, scooped up by Kirkland Lake Gold (TSX:KL) in 2016 through a merger.

At the site of these hits, the Swan zone, KL has mined 1.5 million ounces over the past three years, with a remaining mineral reserve of 1.6Moz at a whopping 38.6 g/t Au. The mine produces gold for just $127 per ounce, and has an AISC of $293/oz, making Fosterville the lowest-cost gold producer in the world. The attractive economics has made Kirkland Lake money hand over fist, driving its market cap from C$2.4 billion to $16.6 billion, at last count.

So what is the connection to New Found Gold?

NFG states on its website, Recent work suggests that the high-grade gold at Queensway is epizonal, similar to the high-grade Swan Zone at Kirkland Lake’s Fosterville mine in Australia, one of the highest-grade and lowest-cost producers globally.

The high grades at both projects are an obvious point of comparison, but the difference is where the mineralization begins. At Swan it’s more than a kilometer deep whereas at NFG’s Lotto zone it begins at 20m and at Keats it starts around 80m down hole. That is interesting because it indicates the potential for the deposit being open-pittable, versus Fosterville where mining is underground.

The big question is, what lies within the 2.5 km dividing Lotto from Keats? If the gold mineralized system connects, the deposit New Found Gold has at Queensway could dwarf Kirkland Lake’s Fosterville. If it does, we expect a major re-rating of the stock, with the Keats zone making the same kind of contribution to the market cap of NFG, currently at around half a billion, that Swan did for Kirkland Lake Gold (ie., $2.5B to $16.6B).

As I do the final edits on this article, early on the morning of Oct 30th, NFG is trading over Cdn$4.00 a share. Not really a lot of leverage there. But as I mentioned above – this is an area play, there are a couple of other well placed juniors poised to benefit from good solid management teams who have exceptional projects in the very best areas of the play and who are fully cashed up and already working hard.

K9 Gold Corp. (TSXV:KNC, OTC:WDFCF, FSE:5GP) is ready to begin the first part of exploring its Stony Lake project, located in the Exploits Gold Belt Area Play. A LiDAR and imagery survey is expected shortly on the property, to be conducted by an expert geomatics team with over 40 years of industry experience. 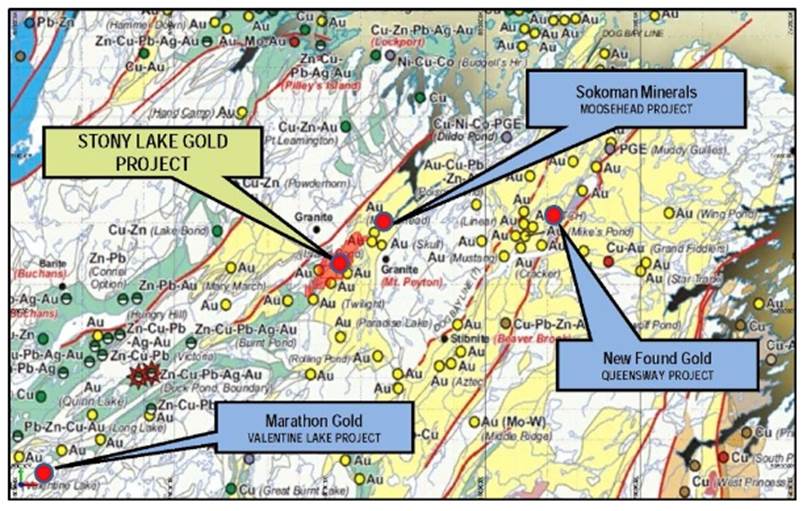 K9 Gold’s 2020 exploration plan will consist of further mapping and sampling to help define a preliminary drill program, beginning with an EM survey to confirm that the structural trend of the Sokoman’s Moosehead discovery does indeed cross onto Stony Lake, angling across the northern part of the property. According to the company, this appears to be a primary basement structure with multiple splays off it, which would become a high-priority exploration target in the basement below the Botwood Group.

This survey will cover the entire property at a 200-metre line spacing and will help to better define the interpretation of the airborne magnetometer, radiometrics and VLF-EM survey conducted in 2019.

Prior to the 2020 field season, airborne geophysical coverage, along with follow-up ground prospecting and sampling, has helped the company to identify as many as eight areas of highly anomalous to high-grade gold mineralization (15.05 g/t).

The company just announced a $1 million financing backed by Palisades Goldcorp Ltd., on to top of an earlier $2.5 million raise by its former namesake, Global Vanadium. A note of interest here, Palisades has several directors, key personnel involved with NFG at the board level. 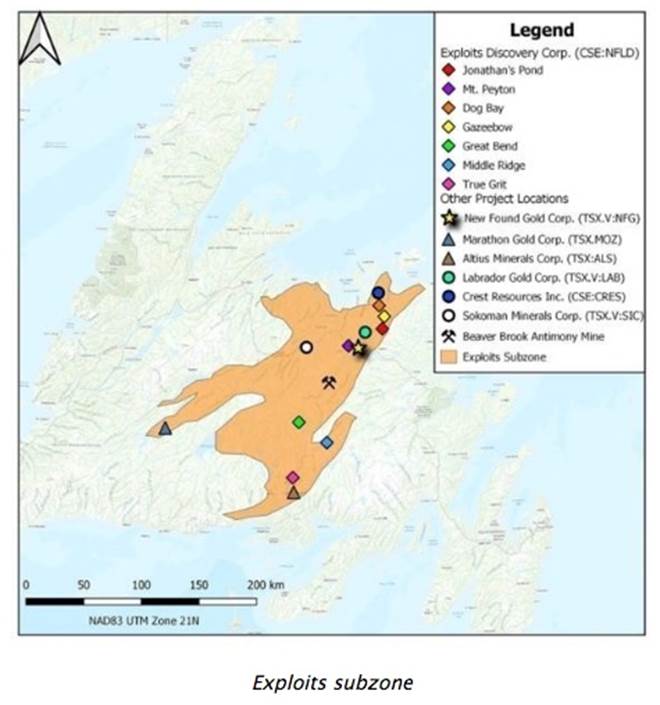 The Exploits Subzone has been considered a prime environment for true discovery, with prominent regional thrust faulting indicative of a long tectonic history and fluid migration.

In fact, Exploits owns the largest land package in the province, besting the likes of New Found Gold and Labrador Gold (TSXV:LAB).

And that geographical advantage recently got even bigger.

Exploits continued its asset buying spree and expanded its already dominant land position with the purchase of four claim blocks, totaling 769 claims and 192.5 km², in an area within the Port Albert Peninsula, where its Dog Bay property is situated.

In exchange, the company issued 6.2 million of its shares (trading at $0.62 per share at the time of transaction) to the claims’ previous owners including Crest Resources (CSE:CRES), which also owns land in the area and was already a stakeholder in Exploits.

And with that, the Dog Bay project has now more than doubled in size at 1,254 mineral claims and 313.5 km², encompassing 21 km of strike length along the prospective Dog Bay/Appleton Fault.

Recall, the Appleton Fault was the focus of New Found Gold’s 2019 Keats zone discovery, and this month’s discovery of 41.2 g/t Au over 4.75 m and 25.4 g/t Au over 5.15 m at NFG’s Lotto zone, as well as advanced exploration work by Labrador Gold on its Kingsway project.

As for the Dog Bay project, its boundary is located just 40 km northeast of New Found Gold’s discovery at Queensway, and is underlain by the same fault zones and similar packages of siliciclastic rocks as the discovery host.

On Oct. 13 the company closed a $3.5 million financing, with proceeds going towards exploration of its properties in Central Newfoundland and general working capital.

The first mover in the Exploits Gold Belt Area Play, New Found Gold, is already a +$500 million market cap company, trading at around $4.00/sh. Yet as the map below indicates, there are a swarm of juniors surrounding the Queensway project, including several well-run companies. K9 Gold and Exploits Discovery are two examples. These gold juniors are cashed up and ready to explore. 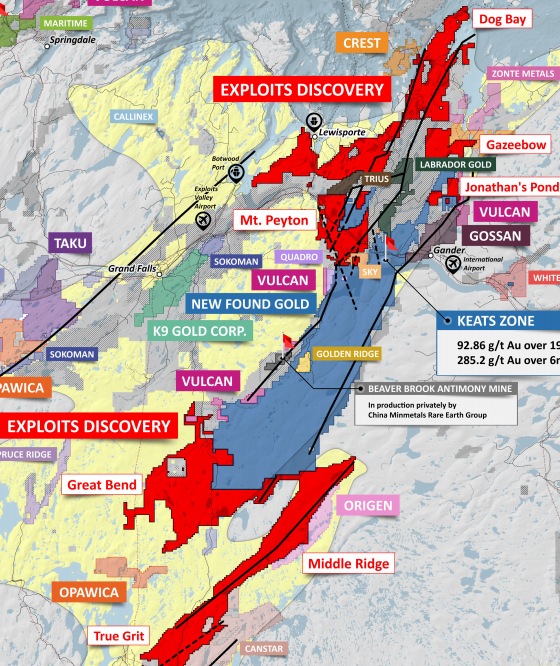 We expect a treasure trove of news flow from Central Newfoundland to hit our computer screens for the rest of the year and into the early part of 2021.

Richard does not own shares of K9 Gold Corp. (TSX.V:KNC). KNC is a paid advertiser on his site aheadoftheherd.com