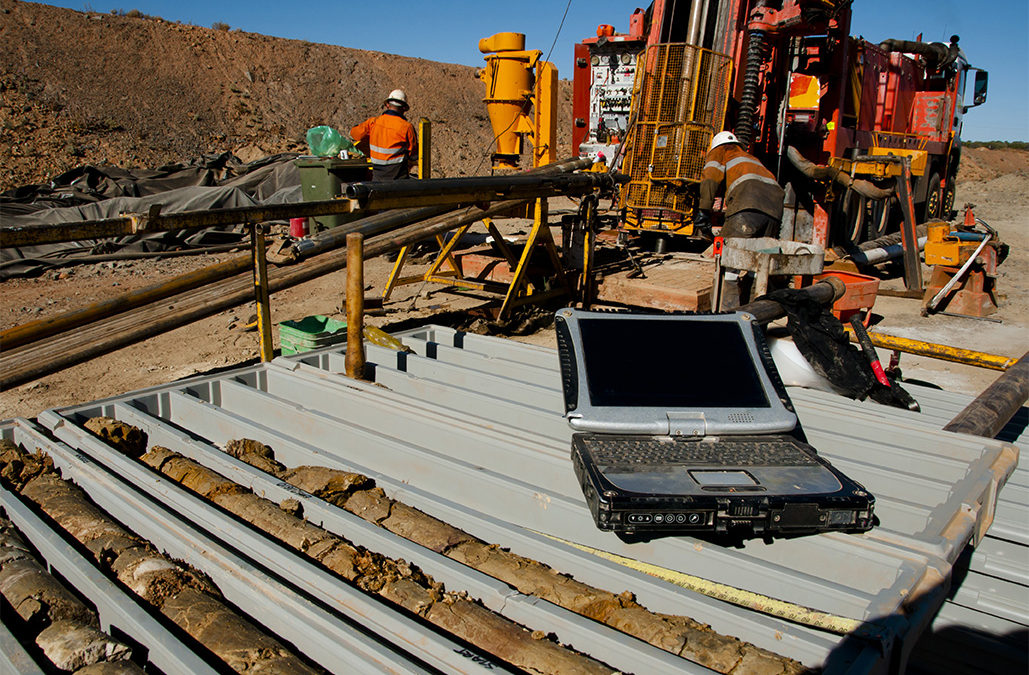 The Exploits Subzone of Central Newfoundland is considered a prime environment for gold discovery, with prominent regional thrust faulting indicative of a long tectonic history and fluid migration.

The Vancouver-based junior is developing seven gold projects that have geological, geochemical and structural settings comparable either to New Found Gold’s (TSXV:NFG) Queensway project, or Marathon Gold’s (TSX:MOZ) Valentine Lake deposit. This ground includes over 40 km strike of the Appleton Fault which hosts Ne Found Gold’s Keat and Lotto Zone discoveries. Some of the named projects include Mt. Peyton, Jonathan’s Pond, Middle Ridge and True Grit. (on the map below, NFLD’s projects appear in red, at the core of and on the northeast and southwest ends of the 240-km-long Exploits Subzone Gold Belt) 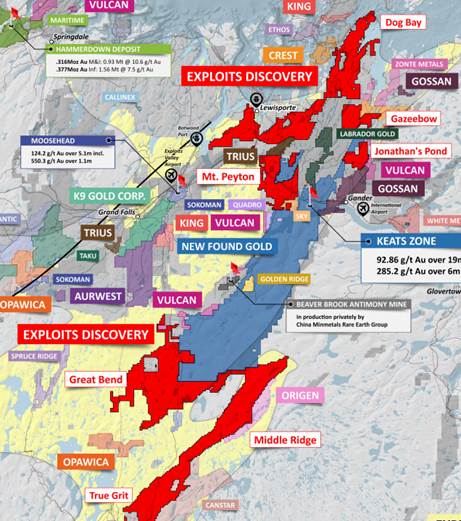 And that geographical advantage just got even bigger. This week, Exploits expanded its already dominant land position with the acquisition of 11.25 square kilometers of highly prospective mineral claims, thanks to an agreement with New Found Gold, the first mover in the region. In November 2019, NFG announced one of the most significant drill results ever reported in the province at its Queensway project: a 19m intercept @ 92.86 g/t Au. Since then, it has successfully gone public and now has over $550 million in market capitalization.

The Exploits Gold Belt Area Play, which has been building since New Found Gold’s 2019 monster intercept, includes several junior exploration companies with much smaller market caps, that have yet to move. Among them is NFLD, sitting just shy of $45 million, which notched a 12-cent gain on the Canadian Stock Exchange following the company’s news on Thursday. That is less than 8% of New Found Golds Capitalization of $565 Million today with lots of room to grow on news and discovery.

As is often the case in mineral exploration, it’s all about location. The map below shows the acquired claims in the red cross-hatched section, located close to the center of the project. According to Exploits, The property hosts the highest documented concentrated cluster of heavy mineral concentrate (HMC) samples on the island of Newfoundland with 24 samples ranging from 720 ppb [parts per billion] to 410,000 ppb Au within a 500-metre radius (Rubicon Minerals Corp., 2002-08). 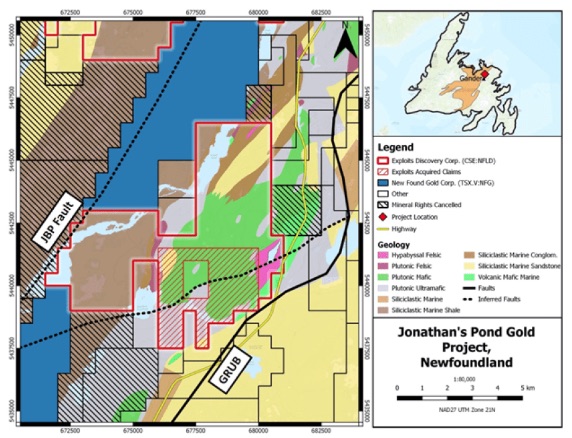 Geology map of the Jonathan’s Pond Gold Project with the Exploits’ property note with a red boundary and the claim acquired from New Found Gold in red hashes. The property is located along the Gander River Ultramafic Belt (GRUB) Fault Zone and is constrained by the JBP Fault Zone to the west. Faults are interpreted through magnetic geophysical surveys.

The company plans to expand the current exploration program at Jonathan’s Pond, by following up on these elevated “HMC’s”, and float grab samples that extend off the original land package. This is exciting news.

Allan Keats, the local prospector who initially identified the “Keats Discovery Zone” (19m @ 92.86 g/t Au) at New Found Gold’s Queensway project, had this to say about Jonathan’s Pond and its discovery potential:

“The Jonathan’s Pond Prospect has the most abundant gold in tills and HMC’s I’ve ever come across. This prospect has all vectors pointing to a discovery, even more than we had at the Keats Zone. Gold doesn’t fall out of the sky, but it can travel 100’s of meters by glacial forces. The source of the gold (has to be) very near by, it has just yet to be found.”

NFG’s Executive Chairman, Colin Kettell, chimed in with a comment about the agreement. Under the deal, New Found Gold will receive 6.562 million shares of Exploits Discovery Corp, worth about $4.2 million, giving the company a 9.9% stake in NFLD. NFG also retains a 2% net smelter royalty (NSR), adding to an underlying 1.6% royalty on the project.

He noted that the agreement gives New Found Gold exposure to the large land package that Exploits has acquired in Central Newfoundland.

Exploits’ President & CEO, Michael Collins, added, “Jonathan’s Pond is our most advanced exploration project and uniting this land package could be pivotal in Exploits making a discovery at Jonathan’s Pond.”

Magnetic geophysical signatures outline multiple highly prospective structures beneath the overburden. The property is located along the GRUB Line fault, a major crustal structure, and is bounded by the Jonathan’s Pond Linear fault.

Outcrop and float samples with gold values up to 29 g/t Au and 700 g/t Au, respectively, in trenches and till samples up to 27,000 ppb Au were found on westerly claims. The magnetic geophysical signatures outline multiple highly prospective structures beneath overburden.

In November, Exploits Discovery announced that Jonathan’s Pond hosts visible gold-bearing quartz veins, assaying up to 27.96 g/t Au. Moreover, outcrop stripping has extended the strike length of the Jonathan’s Pond (JP) vein to 250m, and in the wall rock.

The acquisition of some very attractive mineral claims belonging to New Found Gold, located smack dab in the middle of Jonathan’s Pond, strengthens NFLD and in my opinion, puts the gold junior front and center of the Exploits Gold Belt Area Play.

New Found Gold is being smart with their assets and their treasury, by investing in companies and management teams that are developing quality projects surrounding Queensway, that have yet to be appreciated by the market.

Exploits Discovery is obviously high on their radar, and well it should be, as the largest landowner in the Exploits Gold Belt Area Play.

We’ve always said, to be a significant player in this camp, your property needs to overlie a deep-seated structure, and have a secondary structure that provides a trap for gold mineralization. Exploits has the faults, subfaults and splays necessary to become a winner in Central Newfoundland. The province’s next major gold discovery could easily come out of Jonathan’s Pond.