Gold is once again in vogue, with the precious metal attracting investor dollars for its safe-haven appeal amid a months-long equities slump.

Gold and stocks often move inversely, and that’s what happened Tuesday, when the Dow Jones Industrial Average posted a third-straight day of gains – the first time that’s happened since November. CNBC reported the equities’ winning streak was due to increased optimism of a trade deal between the US and China, along with outperformance by the FAANGs – in particular Apple and Amazon.

The metal has also been helped by speculation that the US Federal Reserve will either hold off raising interest rates in 2019, or limit them to two raises. Higher interest rates push gold prices down, since investors prefer to park their money in bonds and other income-yielding instruments rather than gold, which pays no dividends.

The gold price is up, but investors are also grabbing as much paper gold as they can. According to the World Gold Council, holdings of gold exchange-traded funds (ETFs) were up 3% in 2018, with December being the third straight months of net inflows (more gold ETFs bought than sold).

Gold ETF holdings increased by 69 tonnes to 2,440 tonnes. The largest contributors were European funds, with Germany adding $2.6 billion and the UK contributing $1.7 billion in inflows, due to economic uncertainties fueled by Brexit.

2018 was the first year since 2012 that total gold-backed ETF holdings (inflows and outflows) topped $100 billion, WGC noted in a report.

The following two ETF charts are from Seeking Alpha, for a list of Gold backed ETF’s, and their charts click here.

ETF inflows are one indication of gold demand, another is central bank buying. Bloomberg reports that after a two-year hiatus, China is again adding to its gold reserves. 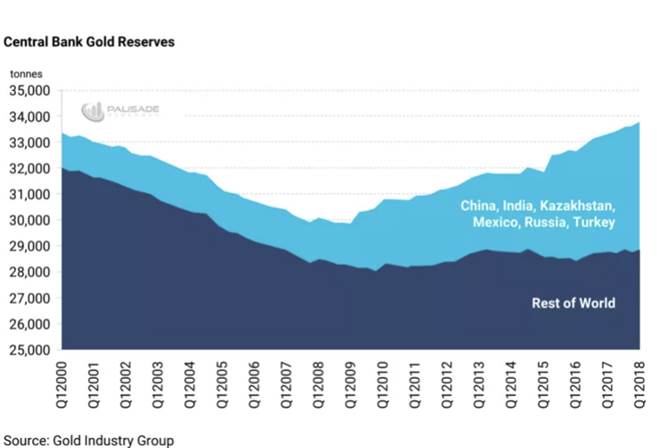 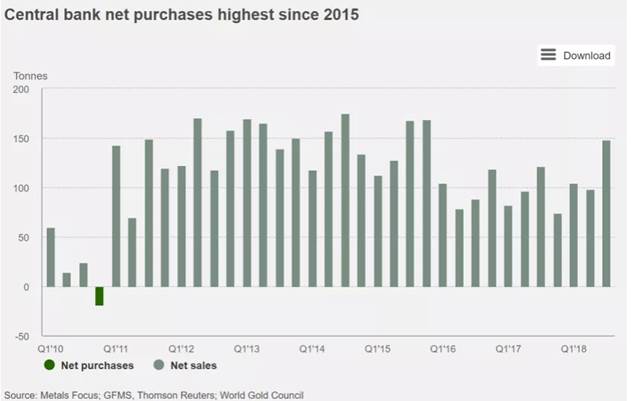 While the numbers from China can’t always be trusted, the People’s Bank of China reports that the central bank increased holdings to 59.56 million ounces at year-end, from 59.24 million. 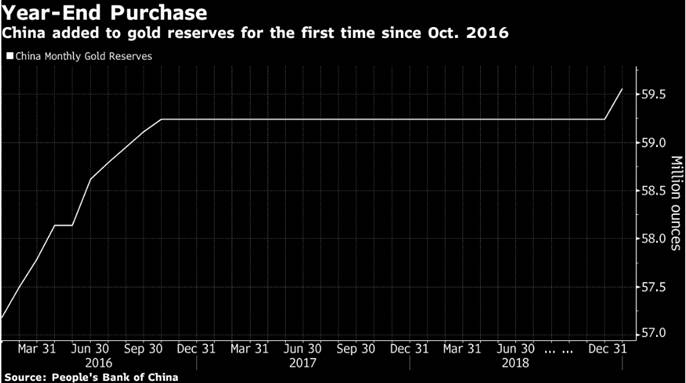 “It’s a bullish sign for gold,” Matthew Turner, a commodities strategist at Macquarie Group Ltd. in London, told Bloomberg. “The reasons could be diversification, a wish to get away from the dollar, but it’s hard to be certain because we just don’t know enough about what their motivations are.”

China is the world’s leading gold producer but the United States has the most gold reserves, 8,133 tonnes versus China’s 1,842 tonnes.

While gold finished 2018 down about 5%, speculators are already weighing in on how the precious metal will do in 2019. According to HSBC, fresh safe haven demand due to continuing concerns about equities, along with higher volatility and economic uncertainty, will push gold higher.

“Gold prices are recovering from heavy investor liquidation and losses throughout much of 2018. Recent equity market declines, higher financial market volatility and other risks are triggering renewed investor demand for bullion,” said James Steel, HSBC’s chief precious metals analyst, quoted in Platts. “Geopolitical and trade risks, which unusually did not lift gold last year (due to the strong US dollar), also appear to be turning positive. We believe gold is set to move higher in 2019, especially if the global economic outlook remains uncertain.”

The analyst also said the biggest threat to gold this year is the US dollar, which has pulled back recently. The USD index lost a buck-fifty over the past month. 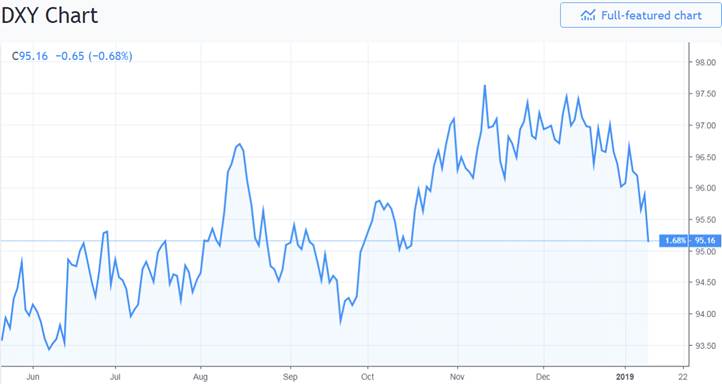 All the recent talk regarding gold no longer being a safe haven seems to be totally false.