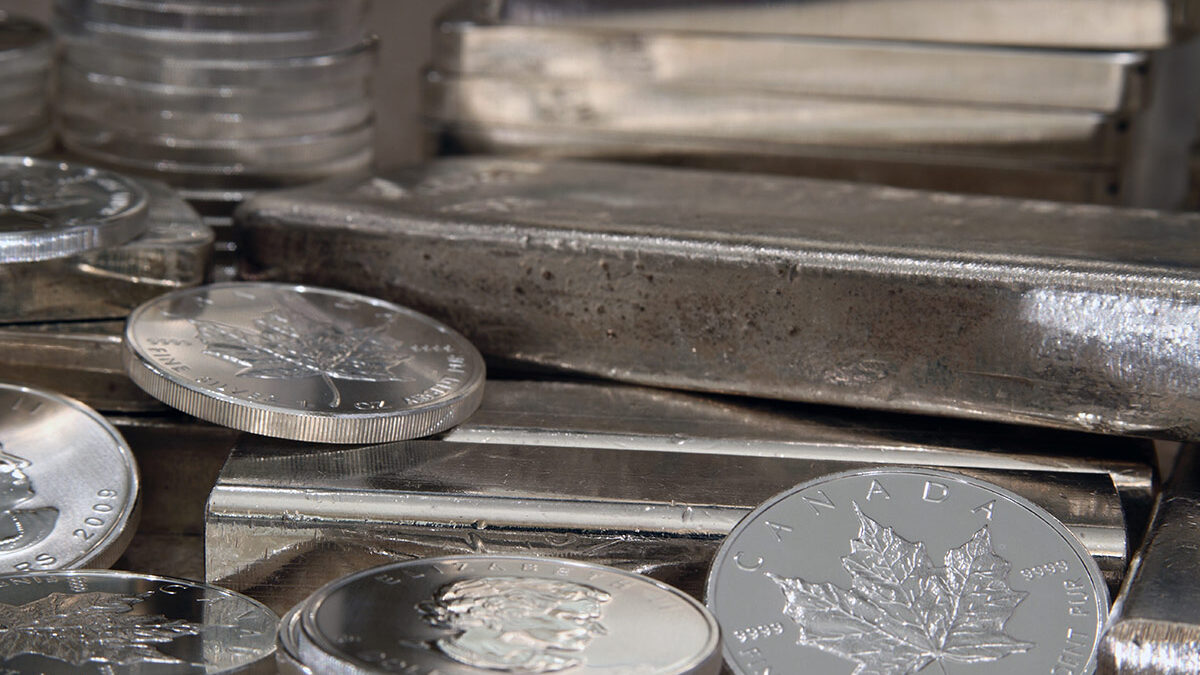 Although battery metals like cobalt, lithium and nickel are all essential to the future of renewable power generation and energy storage, one could argue that silver may even play a bigger role across many green technologies.

A key tenet of any aggressive plan to combat climate change is to build more solar panels, which use silver paste as a key ingredient. It is estimated that about 100 ounces of silver are consumed per year for this purpose alone.

However, this figure is expected to rise in the coming years, with continued growth of electricity demand, renewable energy aspirations and falling costs all pointing to rising solar power penetration.

Some projections have silver demand growing 85% to about 185 million ounces in 10 years, according to a report by BMO Capital Markets.

Silver is also found in many car components throughout vehicles’ electronic systems, and despite not being used in batteries, its superior electrical properties make it hard to replace across a wide and growing range of automotive applications.

According to a report recently published by The Silver Institute, the automotive industry is expected to use approximately 61 million ounces of silver in 2021. As the world transitions from combustion engine powertrains to electric powertrains, this sector’s demand for silver could rise to 88 million ounces within five years.

Looking ahead, 5G cellular technology is set to emerge as another major driver of silver demand.

A nationwide buildout of the 5G network will require a massive amount of investment in infrastructure upgrades, placing silver in a unique position to benefit. Semiconductor ICs/chips, both within smartphones and vehicles, are used to process the frequencies 5G requires, and as electronics continue to get smaller, this will require denser packaging technologies.

According to The Silver Institute, such needs, whether in chips, IoT devices, vehicles, smartphones or other tools, are expected to increase annual silver demand from 7.5 million ounces today to 23 million ounces by 2030.

A promising outlook for silver sets the tone for those further down in the supply chain, with miners reaping the rewards of the higher demand and thus price of the metal.

One prospective silver producer that we’ve been tracking closely is Dolly Varden Silver Corp. (TSXV: DV) (OTC: DOLLF), which is exploring one of the richest mineralized regions on the planet: the Golden Triangle of British Columbia.

Silver is often a byproduct of gold mining, and as the name suggests, the Golden Triangle is esteemed for its impressive array of gold discoveries, both in the past and present.

With over a century of mining history, this particular area of BC has already been the site of three gold rushes and is home to some of Canada’s greatest gold mines such as Premier, Snip and Eskay Creek.

Dolly Varden’s flagship project (also named Dolly Varden) covers 88 square kilometres of land in the Stewart Complex of northwestern BC, an area that is well-known for its base and precious metals deposits.

The property hosts four historically active silver mines — Dolly Varden, Torbrit, North Star and Wolf — all of which have parts that remain unexplored.

As shown in the map below, Dolly Varden’s project is in the bottom corner of the Golden Triangle. It lies to the west of Hecla Mining’s (NYSE: HL) Kinskuch project and borders Fury Gold Mines’ (TSX: FURY) Homestake Ridge.

Kinskuch is an early-stage project with the potential for discovery of epithermal silver-gold, gold-rich porphyry and VMS deposits. At Homestake Ridge, the project’s PEA study has envisioned a 13-year mine with peak annual production of just over 88,000 gold-equivalent ounces.

However, unlike most in the region, DV’s project is volcanogenic massive sulfide (VMS) and epithermal-style pure silver deposit in nature, which is extremely rare in the mining industry.

According to the company, only 3% of the property has been explored in detail, leaving tonnes of upside for shareholders as well as investors looking to position themselves for the next silver rally.

As with many parts of the Golden Triangle, the Dolly Varden mines are a rich part of British Columbia’s mining lore.

Mining activity at the property can be dated back to 1910, when the original Dolly Varden mine was discovered by Scandinavian prospectors.

The name ‘Dolly Varden’ hails from a heroine of Dickens’ novel, “Barnaby Rudge”, as foretold in a dream to a relative of one of the discoverers. The dream was indeed gilded with a silver lining.

In 1919, the Dolly Varden mine came into production and quickly established itself as one of the British Empire’s richest silver mines. It was also in the same year when the property expanded further with the discovery of another deposit nearby.

This deposit, named Torbrit, comprises one of the potential deposits on the properties today and contributed to most of the historical production at Dolly Varden. At one time, it was considered the third-largest silver producer in all of Canada.

Altogether, about 20 million ounces of silver were produced from the mines on the Dolly Varden property over a 40-year period, with assays of ore as high as 2,200 oz (over 72 kg) per tonne.

Production subsequently ceased due to low silver prices, and the assembled property was eventually acquired by Dolly Varden with a view of re-awakening the historic silver mine.

Part of the company’s mission to re-establish silver mining operations at Dolly Varden is to expand and upgrade the existing resources, which is estimated at 32.9 million ounces of silver in the indicated category and 11.477 million ounces inferred, all adjacent to the historical deposits.

For this, DV has drawn up an aggressive two-year campaign, beginning with this year’s initial surface diamond drill program targeting the Torbrit deposit and multiple silver-rich satellite zones.

The 2021 drill program, which is already underway, will consist of 10,000 metres, split 50/50 between infill and expansion of the high-grade, potentially bulk-mineable silver resource.

Drilling at Torbrit will specifically focus on areas within the updated block model, where a high percentage of inferred resources exist, and where the higher silver grade blocks are at the outer edges of the model.

According to the company, it is these areas that have the potential to expand the model out along the Torbrit horizon. In addition, infill drilling from 2020 indicates that a number of lenses that have been modelled out as separate zones coalesce in places into one continuous mineralized body, creating an opportunity for expansion.

“We are excited to start the 2021 drill program at Torbrit silver deposit, where the recent geological modeling and interpretation suggests multiple areas to expand and upgrade the mineral resource. This drilling should lead to a much better understanding of the deposit, new resource expansion areas and give us additional confidence to apply preliminary bulk underground mining designs and more advanced economic studies.”

Despite its long production and exploration history, new silver discoveries are still being made on the Dolly Varden property.

Structural re-interpretation of the whole project suggests that there is enormous exploration upside near the Torbrit deposit, as well as all the way up the trend to the northern end of the property.

The fact it is hosted in the Hazelton formation, a Jurassic package of volcanic rocks that went through the same expansion or release of pressure called the Eskay Rift period, lends credence to the company’s belief that a new silver district is emerging in this part of the Golden Triangle.

It is during the Eskay Rift period that a lot of the metallogenic deposits throughout the region were emplaced. This was followed by a compressional period when a lot of the structures that host the epithermal veins were formed.

According to the DV team, these epithermal veins were probably instrumental in the formation of deposits on the seafloor, VMS-style.

One of the key deposits it often refers to is Skeena Resources’ Eskay Creek, located right in the heart of the Golden Triangle to the north of Dolly Varden’s ground. A precious and base metal-rich VMS deposit, the Eskay mineralization has been the focus of considerable exploration activity dating back to the 1930s.

When in production, this historic mine was the highest-grade gold mine in the world, having produced 3.3 million ounces of gold and 160 million ounces of silver at average grades of 45 g/t Au and 2,224 g/t Ag during 1994-2008.

Both the Eskay Creek and Valley of the Kings deposits are said to be located on the same structural trend to the north of the Dolly Varden property, which likely represents the “silver end” of these styles of mineralization.

Could Dolly Varden represent the southern end of a silver district that extends northward? It seems likely and further exploration may prove it.

With silver continuing to play a critical role in all “green revolution” discussions, there should be plenty of traction for silver-focused companies like Dolly Varden going forward.

The company is well underway into a drilling program that could potentially expand its silver resources by three times more. This would support its belief that there is a pure silver district emerging within the Golden Triangle of BC, where many past explorers have found success.