Citi Bank is bullish on copper and appears to be brimming with optimism that the United States and China can strike a trade deal soon. 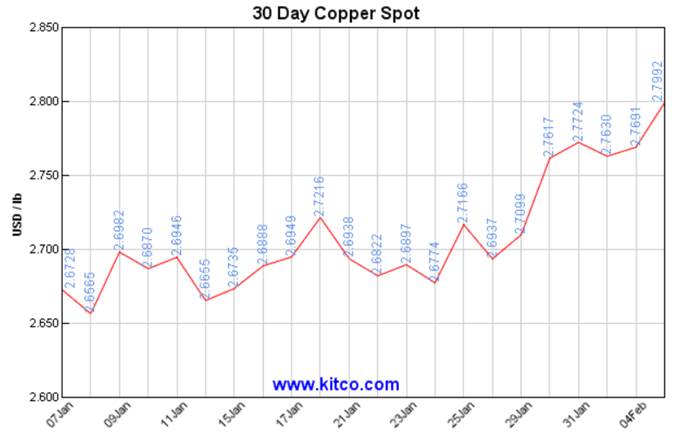 The New York-based bank said in a report Monday that it expects the bellwether metal to rally 10% over the next three to six months, during which time the Chinese and US trade delegations should come to an agreement on the near-year-long trade dispute.

That would put copper at $6,700 a tonne this year due to 2% growth in Chinese demand “led by strong growth in late cycle construction completions and power infrastructure investment,” Citi said, adding that growth in electric cars will buttress copper needs.

The banks also predicts copper inventories, which are at a 10-year low, will fall further in the second quarter and leave the copper market in a deficit of 200,000 tonnes this year and next. 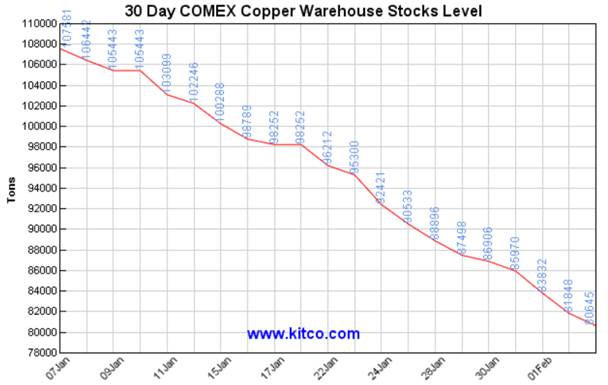 While there are sticking points on intellectual property and technology transfers, US trade negotiators and President Trump appeared confident on a deal after two days of high-level talks. CBC reported:

[US trade representative Robert] Lighthizer said there was “substantial progress” on these issues, including verification mechanisms to “enforce” China’s follow-through on any reform commitments it makes.

“At this point, it’s impossible for me to predict success. But we’re in a place that if things work out, it could happen,” Lighthizer said at the Oval Office meeting.

Trump, speaking at the White House during a meeting with Chinese Vice Premier Liu He, said he was optimistic that the world’s two largest economies could reach “the biggest deal ever made.”

Although it must also be said that time is ticking. If no resolution is reached before March 1, tariffs on $200 billion worth of Chinese goods will increase from 10% to 25%.

Citi’s bullishness on copper is no surprise. While the price dropped last year, on Chinese growth concerns, it’s long-term supply and demand that copper miners and explorers look to, as far as planning expansions and development properties.

As we wrote in The coming copper crunch, by 2035, without major new mines up and running to replace the ore that is being depleted from existing copper mines, we are looking at a 15-million-tonne supply deficit by 2035. Four to six million tonnes of added capacity are needed by 2025.

Lower ore grades are also expected to be painted into the waning supply picture. Copper grades have declined about 25% in Chile in the last decade – highlighting the urgent need for grassroots exploration to arrest the trend.

Finally, some of the world’s largest copper mines are slashing production, thus feeding into the supply deficit thesis that is predicted to push the copper price back up over three dollars a pound.

Since the start of the year, copper has risen nearly 7%. Let the copper bulls run.