With 160 years of gold mining that dates back to the Comstock Lode discovery in 1859, Nevada has been, and still is, one of the best jurisdictions to find gold.

The state owes its unique geology to the northern Great Basin which features a number of mountain ranges and valleys where the rocks below have been smashed together and pulled apart through tectonic activity dating back millions of years.

A 2017 technical report denotes 409,000 oz of indicated resources grading 6.18 grams per tonne, and 660,000 oz inferred grading 6.4 g/t, for a combined 1.1 million ounces. The entire project can be visualized as a vein swarm close to surface, with veins and veinlets trending in all directions, shown in red in the map below. 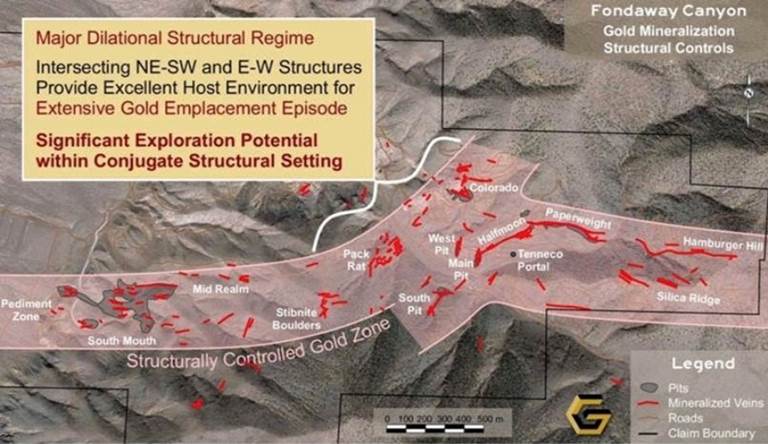 What really stands out to us at Ahead of the Herd (AOTH), is the opportunity to add significantly more ounces if the structures, and ultimately the source (a potential Carlin-type disseminated gold system), of Fondaway’s extensive sulfide epithermal vein system can be identified, mapped and drilled.

The fact that at Fondaway there are multiple zones with mineralization going in different directions, shows that from a geological perspective, every open crack that was available during gold emplacement was filled. Here you have veins where, in every single piece of open space – no matter the direction – that was available for fluid to flow, the fluid went there depositing precious metals along the way.

It’s pretty obvious we are talking about a massive amount of fluids coming from a big source. The big mystery, is how did the gold get there?

Referring to the same map, we see both a structurally controlled gold zone between the Pediment zone and Pack Rat/ South Pit zones, and a major dilational structural regime, between Pack Rat and Colorado, which could host extensive gold emplacement. Two very prolific zones cross each other at an oblique angle in the Halfmoon area.

Is there a massive heat source underneath these zones? Or is the source out west in the pediment – a flat, gravelly plain (also known as the Carson Sink, an ancient lakebed) that fronts the hills and valleys where the rest of the targets are dotted throughout?

According to this theory, boiling-hot fluids flowed west to east like squeezing a tube of toothpaste, through the fissures and faults of the earth’s crust, depositing gold and silver minerals from the westerly range-front, several kilometers up into the hills as far as the Hamburger Hill and Silica Ridge zones.

The short answer is we don’t know. Yet.

What we do know is there are generally two models that explain how fluids, pregnant with gold, find their way into veins and structures.

The first model involves deep breaks in the earth’s crust. Driven by extreme heat and pressure from the earth’s mantle, gold-bearing fluids travel through these crustal breaks for long distances – up to 20 km in some cases – where they end up as veins in the upper crust. An example of this type of gold emplacement is the Archean greenstone belt hosting the Red Lake underground gold mine in western Ontario.

This is quite different from the Nevada environment, where the “engine” of the fluid flow isn’t the mantle; rather, there are hot spots within the upper crust that mobilize the fluids. The fluid penetrates existing rock, crystallizes, and solidifies into gold-bearing “intrusives”.

In a classic Carlin-style gold environment, the fluids have flowed into sandstone units, which were previously deposited into an underwater sedimentary basin. The basin has bits and pieces of lime and fragments of calcium carbonate, from the shells of organisms that died and fell to the sandy ocean bottom.

As the fluids find their way into this environment the calcium triggers a change in the pH of the water, as well as the eH, which is the fluids’ electrical charge. The combination of these two reactions encourages the gold to drop out. It also gives gold places to drop into – as the calcium reacts with the fluid it creates voids in the sandstone, into which the gold is deposited. A mass of fluid soaks into these porous sandstone sediments, and by reacting with the carbon and calcium it coaxes out the gold and creates more fluids that push further out into the system.

Getchell’s job is to figure out whether its project fits the picture of this kind of a big system, and if it does, how do they find the pathways that carried the gold from a presumably much larger deposit, located below the near-surface mineralization?

This week an important piece of the puzzle fell into place when Getchell Gold released information that appears to support the theory that Carlin-style gold mineralization exists on the west side of the project in the Pediment Zone. 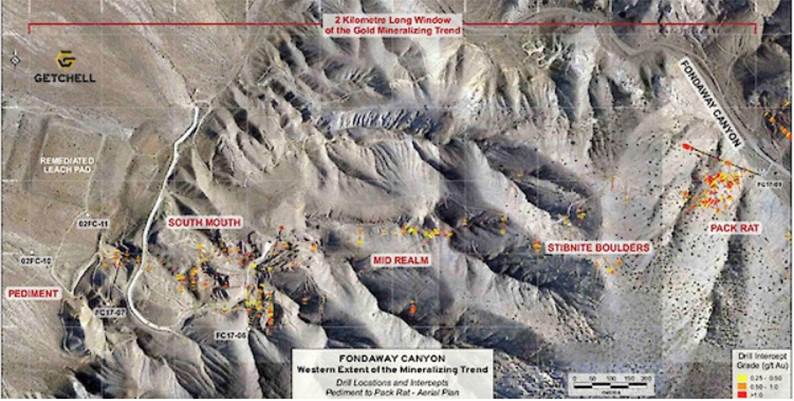 Two vertical holes were drilled in 2002 west of any historic drilling to test targets hidden beneath the pediment. Holes 02FC-10 and 02FC-11 were a distant 185m apart, but they intersected broad mineralization of 27.4 meters grading 0.82 g/t Au and 36.6m grading 0.52 g/t Au, respectively.

“The gold mineralization encountered in the Pediment holes is hosted in limestone and represents a significant ‘Stand Alone Carlin Style Target,’” according to Getchell’s news, and “The drill results support the potential that a larger gold mineralizing system at Fondaway has yet to be revealed.”

This is a significant development. We now know that in the Pediment Zone, two holes delivered limestone gold intercepts, which is another major indicator that Fondaway Canyon consists of a larger gold mineralizing system. (the first indicator is Fondaway’s extensive sulfide epithermal vein system, comprising an astounding 14 vein swarms)

According to Getchell, The Pediment target is on trend with the South Mouth gold-bearing shear zone and is located west of the range front fault that is situated at the western margin of the Stillwater mountain range.

Could it be that the 4-kilometer-long epithermal vein system at Fondaway Canyon was caused by a large Carlin-style gold system out in the pediment? A primary target is the intersection of the east/ west Fondaway Canyon fault and the north/ south range front fault.

Widely available Nevada geological history sites this major north-south range front fault west of the Stillwater range of hills. The fact that there is a fault at the range-front is unremarkable. Nevada hosts many range-bounding faults, some of which are still seismically active. And there are a lot of canyons running off the range fronts in Nevada.

What makes this area so unique unique is, its got gold. Gold in the two holes drilled into the pediment that encountered gold in limestone, and all that gold in the vein swarms in Fondaway. Could there be a large Carlin-type sedimentary gold deposit where the range front fault meets the Fondaway Canyon fault? (which is a significant geological structure, a fault, in itself)

We don’t know but it is an intriguing target that needs to be explored.

Again we can only theorize.

But when we combine everything we know about Getchell’s project so far, we see it ticking all the boxes of a much bigger system than what we are seeing with the emplacement of gold in veins. Is that system Carlin-style gold? Too early to say but let us review, and tick:

Getchell says it is planning a 2020 drill program designed to provide “high value enhancement relative to cost” and set the stage for further advancement of the project. Given the potential here, I can’t wait.