Sometimes in mining, you’ve gotta drill deep to find the high-grade rocks. That’s the case with Skyharbour Resources (TSX-V:SYH), exploring for uranium in the world-renowned Athabasca Basin of northern Saskatchewan.

The Basin is famous for its high grades – at over 20 times global averages. Some deposits are over 100x the world average including Cameco’s Cigar Lake which contains an average 17.8% uranium. In comparison the Priargunsky underground uranium mine in Russia has grades of just 0.15%. Or Rio Tinto’s Rossing open-pit mine in Namibia, with grades of 0.03%, compared to over 19% in Denison’s Phoenix deposit – a difference of 630X.

The Athabasca Basin produces about 15% of world uranium supply. Major mines include Cigar Lake, held jointly between Cameco, Areva (now Orano) and Tepco Resources, McArthur River and Rabbit Lake mines, both of which are currently on care and maintenance.

Stepping out 100m from the Maverick Zone, Skyharbour also discovered a new high-grade mineralized lens, where 9.12% U3O8 over 1.4m and 4.17% U3O8 over 4.5m at 278m depth was found. This year a drone survey was conducted along the corridor, flown at close 20m spacings at 35m elevation. This enabled Skyharbour to better define high-priority targets. A 3,400m, 9-hole winter drill program returned high-grade mineralization and successfully expanded known zones. This fall’s 3,000m program however will take a different tack, and will focus on drill-testing the Maverick corridor primarily below the unconformity in the relatively untested basement rocks. 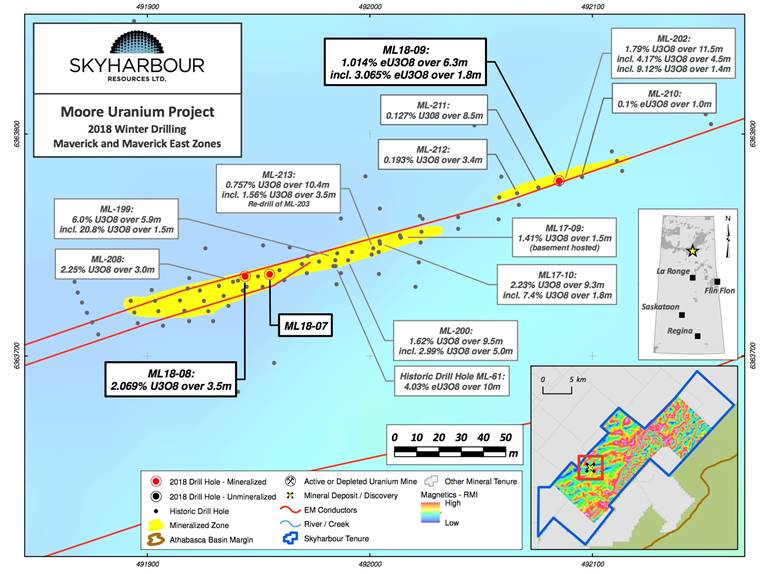 “The known high grade, unconformity-hosted uranium mineralization at the Maverick corridor was deposited there through feeder zones in the basement rock, the discovery of which will be a top priority in this upcoming program given other recent basement-hosted discoveries including NexGen’s Arrow Deposit, Fission’s Triple R Deposit and Denison’s Gryphon Deposit,” says CEO Jordan Trimble, referring to high-grade, high-tonnage discoveries in the Athabasca Basin.

So what’s the big deal about basement rock and feeder zones? In 1968 the uranium exploration game changed when geologists, looking for sandstone-hosted deposits at Rabbit Lake, discovered an orebody in the underlying basement rocks. Located on the contact between the overlaying Athabasca sandstones and basement crystalline rock, these deposits later became known as “unconformity” bonanza-type uranium deposits due to their high grades.

See the diagram below for a typical unconformity uranium deposit, courtesy of Uravan Minerals. 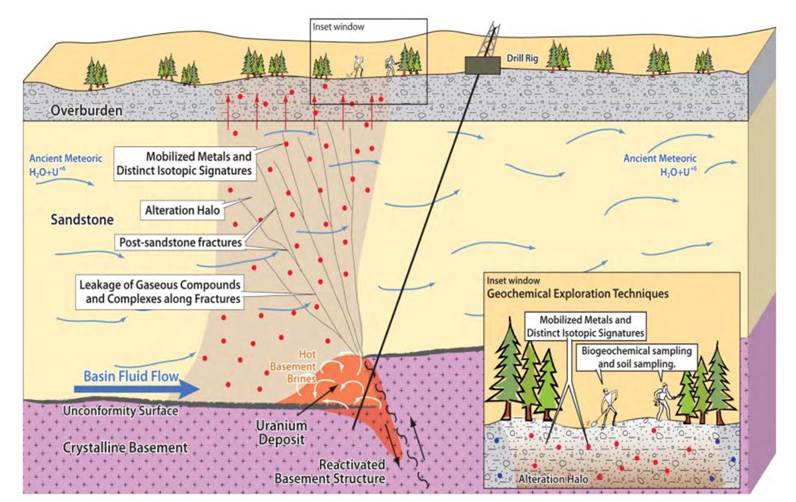 Another important aspect of the Rabbit Lake discovery, notes MINING.com in a primer on Saskatchewan uranium mining, is that radioactive boulders found at surface were often indicative of rich uranium deposits over 500m depth.

In 1975, as part of the Key Lake discovery, it was revealed that unconformity-type uranium deposits are associated with graphite, which helped explorers pinpoint uranium deposits through electromagnetic (EM) surveys.

A 2014 Masters thesis submitted to the University of Saskatchewan’s Department of Geological Sciences explains the graphite-uranium connection. Here’s an excerpt from the paper:

Graphite and/or its breakdown products are suggested to be responsible for uranium mineralization by acting as a reductant that could trigger deposition of uranium. Also, graphite is considered to be indicative of basement structures; being often concentrated along structures which can be identified as electromagnetic (EM) conductors. Thus, exploration for uranium deposits is often focused on the search for EM conductors.

Back to Skyharbour, the company has all the permits needed for its upcoming diamond drilling program which will consist of 8 to 10 holes. Most of the exploration will take place at the Maverick corridor where basement rocks will be tested below the Main Maverick Zone, where high-grade unconformity-style uranium mineralization has been identified.

“Prior drilling within the basement rocks, although of minimal extent, has intersected significant structural disruption and favourable alteration along with anomalous pathfinder elements and low grade uranium mineralization. These characteristics bode well for the discovery of basement-hosted feeder zones to the overlying high grade, unconformity-hosted uranium mineralization within the Maverick corridor,” reads the press release. 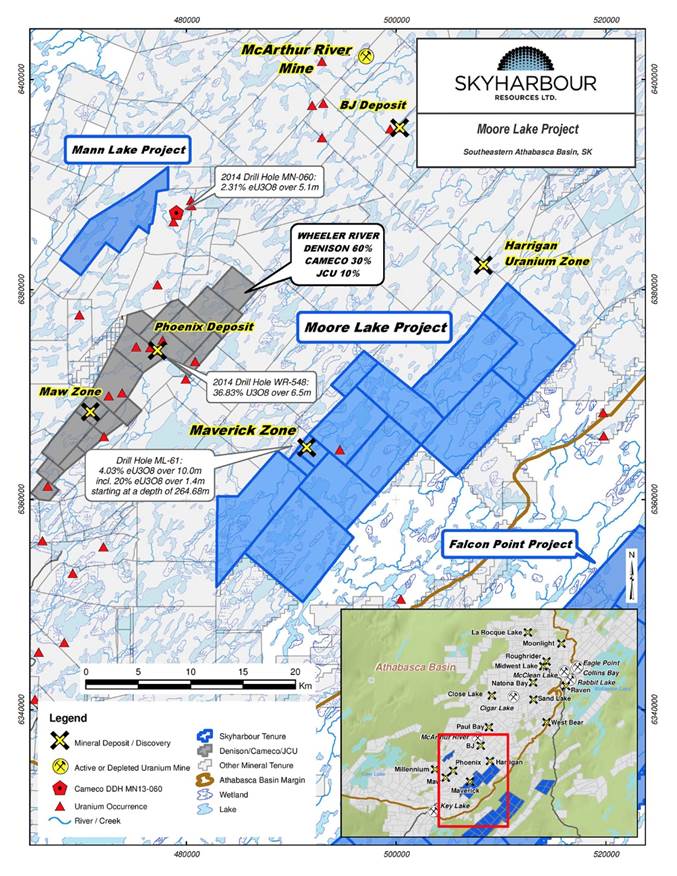 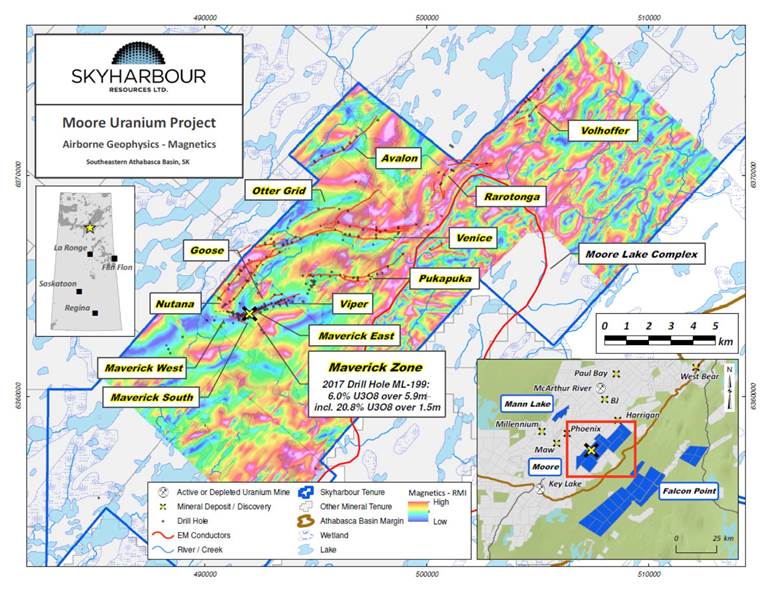 SYH is sitting at an excellent cash position to embark on this new phase of exploration. Just over a million warrants were recently exercised, topping up the treasury with close to $450,000. The extra funds mean that Skyharbour has completed its earn-in agreement with Denison Mines on the Moore property almost three years ahead of schedule.

The option agreement required SYH to spend half a million in cash and shares within five years, and also pay $3.5 million in exploration expenditures (now complete), in order to get 100% of the project. Denison elected not to exercise a buyback option, so Skyharbour now owns Moore. The company has another five years to complete $3 million in exploration, at which point Denison has a second buyback option to repurchase a 51% interest in the project. If Denison again turns that down, Skyharbour would retain its 100% ownership. If the option is exercised, the two companies would form a joint venture.

Along with Moore, Skyharbour owns 100% interests in the Falcon Point, Yurchison and Mann Lake uranium projects on the east side of the Basin. The Falcon Point property hosts an NI 43-101 mineral resource of 7 million pounds U3O8 inferred at an average grade of 0.03% U3O8 and 5.3 million pounds thorium dioxide inferred at an average grade of 0.023%. Mann Lake is located adjacent to the Mann Lake joint venture operated by Cameco, where high-grade uranium mineralization has been found.

The company also has a 50% interest in the Preston Project – one of the largest land packages (75,965 hectares) in the Basin – located near Fission Uranium’s Patterson Lake South Triple R uranium deposit and NexGen Energy’s Arrow deposit, both of which contain high-grade uranium.

Under a prospect generation arrangement, SYH optioned 70% of Preston to French nuclear giant Orana (formerly Areva), which can earn up to 70% of Preston by spending $8 million over six years. The other 30% would be divided between Skyharbour and Clean Commodities. At the same time, Skyharbour agreed with Azincourt Uranium to option 70% of another portion of Preston, with Azincourt issuing 4.5 million shares and spending $3.5 million over three years, to Skyharbour and Clean Commodities. The two agreements in total mean that for $11.5 million in exploration and cash payments plus 4.5 million Azincourt shares, 70% of the Preston and East Preston projects will be optioned off.

I’m impressed with Skyharbour’s discipline in carrying out its part of the earn-in deal with Denison Mines, well before the close of the five-year window. I’m also eager to see “what’s in the basement” when the company begins drilling again at Moore. Could Skyharbourbe another Fission or NexGen? Some great assays are exactly what uranium explorers need to kickstart some interest in a sector that has been hit hard due to sagging uranium prices. But as we recently explained, that is going to change, in a big way.

Read our Why the uranium price must go up for an explanation of the growing need for nuclear power, uncovered demand, depleting spot supply, and the expected Trump tariffs on uranium. It all means higher prices for the nuclear fuel are coming. The best leverage to a rising uranium price is a uranium junior, which is why I have SYP and its upcoming exploration program on my radar.