Warren Buffett did what he said he’d never do, and that is buy gold – not the physical metal, nor an ETF, but a gold mining stock. Buffett and/or his holding company’s managers chose ABX, as it is known in Toronto, or GOLD, on the New York exchange. The surprising trade is highly symbolic given Buffett’s previous fervently anti-gold public statements.

Last Friday the Oracle of Omaha’s Berkshire Hathaway (NYSE:BRKB) picked up about 20 million shares of Barrick Gold (TSX:ABX), presumably on the strength of the second largest gold company’s growth potential, and the fact it pays a $0.08/share dividend.

“If you own one ounce of gold for an eternity, you will still own one ounce at its end,” the Oracle famously wrote in a 2011 annual shareholder letter, joking about a big pile of gold that “you can fondle the cube, but it will not respond.”

But Buffett also pointed out in the same letter, “what motivates most gold purchasers is their belief that the ranks of the fearful will grow.”

It now appears Buffett is scared too, of where current US stock markets are heading, and is buying gold as insurance.

Currently there is a major disconnect between what is happening in US stocks versus the American economy, and that is worrying investors.

Despite US GDP plummeting more than 30% in the second quarter, the worst contraction ever, the main stock market indices have nearly fully rebounded from their March crash.

There are concerns about a second wave of coronavirus cases further crippling the economy, about the lack of agreement on a major $1 trillion stimulus plan from Washington, and the US-China trade war seems to be back on the boil. Inflation is also rearing its ugly head, mostly in the form of increasing food and gasoline prices, with worries about more to come. The US Federal Reserve has signaled near 0% interest rates until 2022, and has taken on trillions of dollars in new debt through money-printing. The Fed is mandated to control inflation, and will try to do so by raising interest rates – bad for stocks but good for precious metals.

Fed officials see the US economy shrinking 6.5% this year.

Shares of Barrick Gold soared 11.3% on Monday, to within a quarter of 40 dollars a share. Year to date, the Toronto-based gold miner has gained 65%, tracking gold prices which earlier this month surpassed $2,000 an ounce for the first time ever.

Gold and silver have been on a tear since mid-March. The usual suspects behind the surges of both metals are worrisome covid-19 infections, geopolitical concerns especially US-China tensions over trade and the South China Sea, inflation expectations on the back of (seemingly) unlimited monetary stimulus, and low interest rates worldwide.

Bullion prices have climbed 34% year to date, as investors choose gold as a safe haven amid widespread economic uncertainty created by the pandemic. They believe gold will hold its value better than other assets such as stocks and bonds.

Silver in July gained an astonishing 35%, as investors sought shelter from pandemic turmoil and low or negative interest rates, while industrial demand for the metal recovered in some parts of the world.

To us at AOTH, it isn’t only the fact that Buffett is investing in gold (via stocks) and seemingly ditching a long-held philosophy favoring quality companies over bullion, which doesn’t generate earnings or revenue. The timing is equally if not more important.

Buffett reportedly referenced a 2001 article in ‘Fortune’ that described “probably the best single measure of where valuations stand at any given moment.”

Known as the “Buffett Indicator,” the measure takes the total market cap of all US companies and divides it by the country’s GDP. When the Buffett Indicator is at 70-80%, it’s time to invest. When it moves above 100%, investors should take their foot off the gas pedal and consider less risky assets. Like, um, gold?

As the chart below show, we are currently way past 100%. We can use the Buffett Indicator to gauge whether US stocks, or indeed global stocks, are undervalued relative to the size of the economy.

At the end of July, Buffett’s favorite market indicator hit a 30-month high. Take the Wilshire 5000 Total Market Index, valued on July 29 at about $33 trillion, and divide it by second-quarter US GDP of $19.4 trillion. That leaves a Buffett Indicator of 170%, a record high. It indicates the economy is well into bubble territory, and likely close to a pop. 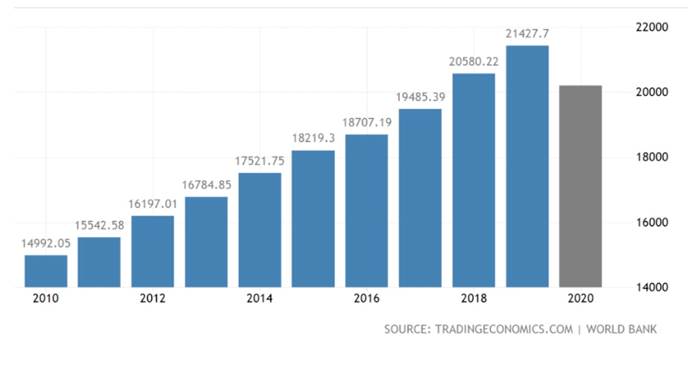 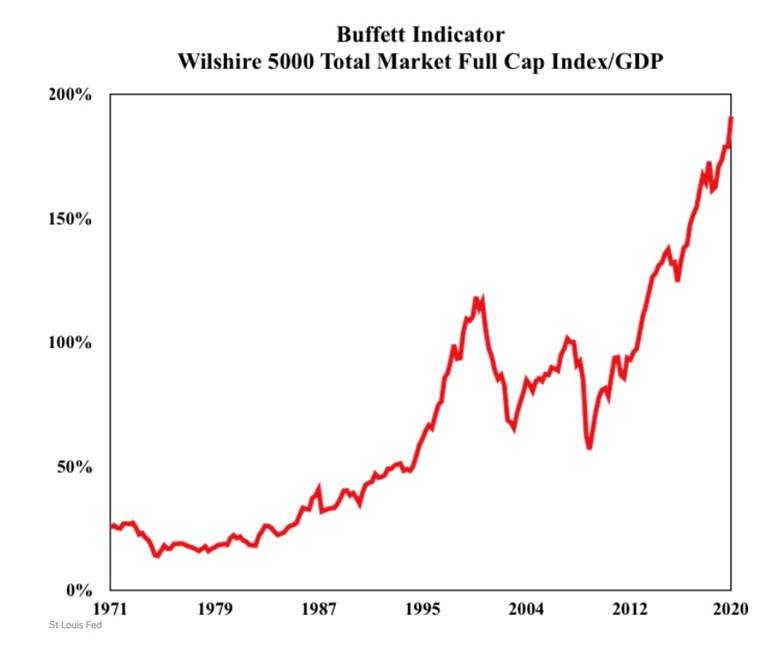 Back in 2001, Buffett warned that when the indicator hit a record high in the months before the dot-com crash, it “should have been a very strong warning signal.”

The indicator’s current level underlines the striking gap between sky-high stock valuations and depressed economic growth in countries around the world due to the coronavirus pandemic.

Stocks have benefited from aggressive intervention by governments and central banks to bail out companies and shore up markets.

Meanwhile, the global economy has suffered from authorities’ efforts to combat the virus, including closing nonessential businesses, restricting travel, and encouraging people to stay at home. 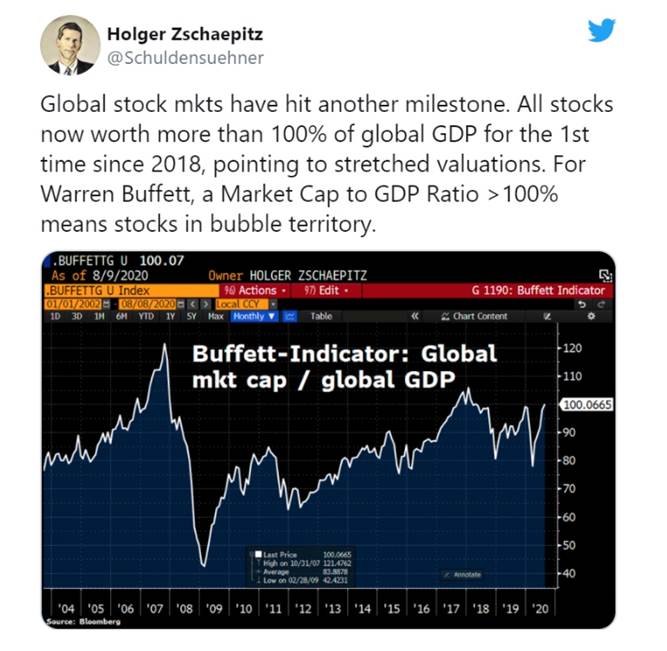 Will investors heed the Oracle’s warning this time and exit risky stock positions in favor of safe havens like precious metals?

It certainly appears that Berkshire Hathaway is. As the multi-national conglomerate holding company was buying Barrick, it was also selling, or had sold, its positions in blue-chip bank stocks, credit card companies and airlines.

Earlier in the quarter, Buffett’s BKRB, market cap $509 billion, exited its position in Goldman Sachs, and reduced its 22.2-million share stake in JP Morgan. The firm is sitting on $146 billion in cash.

In a 1997 speech at Harvard University, Warren Buffett had this to say about gold:

“(Gold) gets dug out of the ground in Africa, or someplace. Then we melt it down, dig another hole, bury it again and pay people to stand around guarding it. It has no utility. Anyone watching from Mars would be scratching their head.”

Or how about this gem, from a 2009 interview with CNBC:

“I have no views as to where it will be, but the one thing I can tell you is it won’t do anything between now and then except look at you. Whereas, you know, Coca-Cola will be making money, and I think Wells Fargo will be making a lot of money, and there will be a lot — and it’s a lot — it’s a lot better to have a goose that keeps laying eggs than a goose that just sits there and eats insurance and storage and a few things like that.”

As gold continues its next leg up after falling briefly to $1,921 last week, it appears that even sages like Buffett need to occasionally adjust their portfolio in ways they never thought possible. It goes to show that even the most staunch opponent of gold is sooner or later, when conditions dictate, going to come to gold.

As comedian Rodney Dangerfield used to say, “I don’t get no respect”. The same might be said of the gold market.

Gold is often criticized by Wall Street as kind of a useless investment.

Gold, through major gold miners such as Barrick, is clearly centerstage.

When the facts change, I change my mind, so does Buffett.