The agreement means that Boliden, a base and precious metals miner with six active mines in Europe and five smelters across Norway, Sweden and Finland, will have the opportunity to earn a 51% stake (Boreal would be the operator) in the project by spending US$6 million in exploration over the next four years.

If that happens, the two companies will form a joint venture, and Boliden will get a crack at earning another 29% by funding and delivering an NI 43-101-compliant feasibility study, pushing its ownership to 80%, Boreal retains a 20% stake.

“The option agreement with Boliden, a leading mining and smelting company in the region, represents a significant step forward in the advancement of Boreal’s exploration project portfolio,” Patricio Varas, Chairman and CEO of Boreal Metals, said in the June 10 news release. “Collaboration with Boliden will maximize the potential for a significant copper-gold discovery at Burfjord and will facilitate value creation during these difficult financial market conditions.”

Based in North Vancouver with an office in Sweden, Boreal currently has two projects on the go: Gumsberg in Sweden and Burfjord in Norway. EMX holds royalties on both properties, along with a 9.4% equity interest.

Gumsberg, an 18,300-hectare land package with five exploration licenses, was mined from the 13th century through to the 1900s, with an astounding 30 historic mines on the property including Östra Silvberg – the largest silver mine in Sweden from 1250 to 1590.

Boreal has an excellent technical team, which would explain Boliden’s confidence in tapping the junior, whose $3 million market cap is a tiny fraction of Boliden’s CAD$8.437 billion market value, to lead the exploration program for the first four years of the earn-in agreement, and possibly the remainder of the earn-in period.

Patricio Varas, Executive Chairman and CEO, has been working in mining for 30+ years. He was a founder of Western Potash, raising over $240 million, and was instrumental in the discovery of the Santo Domingo Sur deposit in Chile, now being developed by Capstone Mining. Varas was also the project manager during discovery at Diavik, a diamond mine operated by Rio Tinto in the Canadian Northwest Territories.

Dan MacNeil, Vice President of Exploration, is a precious and base metal specialist with over 19 years of experience with continental-scale project generation to in-mine resource expansion, in a wide variety of geological settings throughout the Americas and Eastern Europe.

Boreal has also brought in former Boliden management which is very unique for an exploration company. Thomas Söderqvist, Director, and Rodney Allen, Technical Advisor, were both senior management at the largest mining company in the region.

Söderqvist started as an underground miner at Boliden at the age of 18 and had an impressive mining career leading him to becoming number four at Boliden, as Senior Vice President, and in December 2018 was the acting CEO.

Allen is an economic geologist specializing in the geology of complex ancient volcanic regions. Throughout his 40-year career, he was Head of Exploration at Boliden and is credited with reviving the Garpenberg VMS mine (near Boreal’s Gumsberg Project).

Garpenberg was near closure with ore reserves running low, but over four years, four new satellite deposits were discovered. Thanks to Allen, Garpenberg’s reserves were lifted from a few million tonnes to 36MT, plus resources of 38MT and production of 42MT, for a total of 116MT by the end of 2013. The four discoveries were the basis of an expansion project in 2014 that nearly doubled Garpenberg’s annual production.

“We’ve been involved in some big projects and had some good discoveries, we’re trying to do the same thing in Scandinavia,” Varas told Ahead of the Herd in a wide-ranging exclusive interview this week.

Burfjord is located 32 km west of the Kåfjord copper mines, the first major industrial enterprise north of the Arctic Circle. The road-accessible project is 40 km from Alta, where there is a regional airport, and 7.5 km from tidewater.

The property is comprised of six exploration licenses totaling 5,500 hectares. Mineralization at Burfjord belongs to the Iron Oxide Copper Gold (IOCG) deposit clan; this portion of northern Fennoscandia is a key IOCG province globally. Copper was mined in the Burfjord area during the 19th century, with over 30 historic mines and prospects developed along the flanks of a prominent 4 x 6-kilometer anticline.

IOGC deposits are among the most valuable concentrations of copper, gold, and uranium ores. These orebodies, ranging from around 10 million tonnes of contained ore to 4 billion tonnes or more, have grades of 0.2 to 5% copper, and gold from 0.1 to >3 grams per tonne. Their tremendous size, relatively high grades and simple metallurgy give IOGC deposits the potential for making extremely profitable mines.

Varas noted having significant successes with IOCG-type projects when he headed Far West Mining. That company formed a strategic alliance with BHP, the world’s largest miner, exploring and drilling properties in Australia, Sweden, Argentina, Chile and Canada. Varas’ team carries that experience with them as they aim to solve the mysteries underlying Burfjord.

“We know these deposits really well, we know what we’re looking for, the tools you need to find them, the kinds of alteration systems you need to have, the type of mineralization – of course this deposit has all of that in spades,” he said. 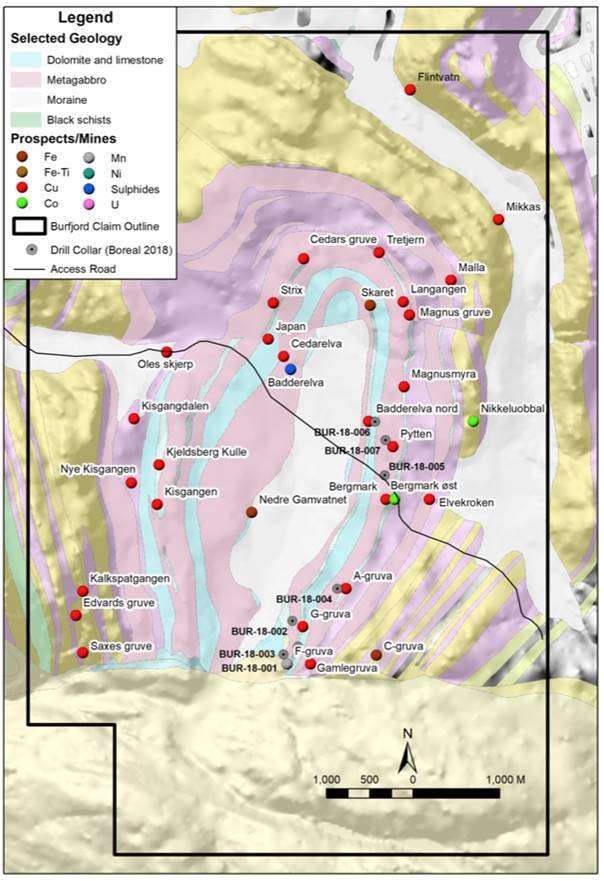 Many of the rocks in the anticline are intensely hydrothermally altered and contain sulfide mineralization. High-grade copper-gold veins at Burfjord that were historically mined at cutoff grades of 3-5% copper are surrounded by envelopes of stockwork veins or disseminations of copper mineralization extending tens to hundreds of meters laterally into the host rocks.

The company believes this mineralization has economic potential and represents an attractive bulk-tonnage exploration drilling target.

Copper-bearing veins are dominated by ferroan carbonate, sodium-rich minerals, and iron-oxide minerals (magnetite and hematite), but also contain the economically important minerals chalcopyrite, bornite and chalcocite in addition to cobalt-rich pyrite as generally coarse-grained (often 0.5 centimeter to multi-centimeter scale) disseminations in the veins.

Taking another look at Figure 1, the property hosts a number of copper occurrences (the red dots) near surface, spread over a large area. These areas are best described as surface pits, mined up to 300 years ago by artisanal miners. It is quite incredible that, until now, no company has tried to consolidate all of these historical workings into a mineable resource. This is the challenge presented to Boreal and, its earn-in partner, Boliden.

Recently Boreal went into these shallow pits for samples, and mapped them.

In March of 2019 the company announced compelling drill results from Burfjord, including an intercept of 32 meters averaging 0.56% copper and 0.26 g/t gold (including 3.46m of 4.31% Cu and 2.22 g/t Au) at shallow depths below a group of historic mine workings. This and other drill-defined zones of copper and gold mineralization are slated for immediate follow-up.

“The fact that it was over 30 meters wide gives you a sense there is bulk tonnage potential for a larger deposit,” Varas said.

Indeed what really gets the CEO’s blood pumping, is the potential for what lies beneath. And remember, this is an experienced geologist who has worked these types of IOGC deposits before. He knows what to look for, and what to do when he finds it.

“The occurrences you see are expressions of a larger system. The deposit for all I know could be buried and so the idea here is to go and find perhaps one large deposit within all of these areas,” he explained. “[The occurrences] give you a sense of the hydrothermal system, meaning the liquids that carried the mineralization were very pregnant with copper. What you want to do is find the right traps, the right environment, where you can concentrate a significant amount of it together and that’s what you’re going to mine.”

Of course, it’s early days to be talking about mining, but the prospect of a large mineralized system right at Boliden’s doorstep must have been a factor in persuading the Scandinavian miner and mineral processor to take a $6-million chance on Boreal Metals.

“In fact the Norway smelter, they get material from as far as Ireland, so for them it’s very natural, it’s strategic to look for deposits that might eventually feed that smelter, so doing exploration in Norway makes a lot of sense for them,” said Varas, adding,

“When you sample around, the amount of copper is quite impressive and I think that’s what impressed Boliden. Having had some success in finding what I think is a very significant deposit in Santo Domingo Sur in Chile certainly helps. I think they have some confidence we can look at these systems and have the right methodology to look for another big deposit.”

So what’s the plan going forward? The next steps for Boreal involve gathering information, to come up with drill targets to present to its new partner.

“You need all of this data, you need the mapping so you can map the structural regime, you need the airborne mag [survey] to find concentrations of magnetic bodies, and you need to see what the distribution of the alteration is, because we know there’s a hydrothermal system there,” says Varas.

Geophysical surveys are certainly a priority, to identify the structures that transported the hydrothermal fluids upward to infill just about every crack in the rocks near surface with mineralization. Varas noted that magnetic and gravity surveys will likely both be required. That’s because iron oxides host magnetite and hematite. Magnetite, being magnetic, shows up in a mag survey, but non-magnetic hematite does not.

“The magnetic bodies don’t necessarily host the copper mineralization, often they occur in non-magnetic bodies, the hematite, but gravity [surveys] would show you that quite well,” he said.

Some of this work could take place as early as July, the CEO let on.

Boreal Metals is seeing a lot of “smoke” at surface, for what could be a very large mineralized copper-gold system at depth, “the fire”.

The fact that Boliden Mining has not only committed to spending $6 million on exploring Burfjord over the next four years, but has entrusted Boreal Metals and its crack team of geologists to managing the exploration program, is a tremendous vote of confidence in the junior.

I also like the fact that Boreal has a buyer for its raw ore waiting in the wings. It makes sense for Boliden to invest in a property that might in the future feed its Norway smelter. The property appears to be in a great location, with the nearby community of Alta serviced by local roads and an airport, and only 7.5 km to tidewater.

Boreal Metals already has a winner in its Gumsberg project in Sweden, now the exploration company is gearing up to explore Burfjord, thanks to Boliden’s decision to fund the expenditures.

I see a lot of potential in this project and I’m eager to see what the initial geophysical studies come up with. Those old mined pits are spread out over a very large area, and there is a lot of them. To my way of thinking there must of been an incredibly powerful driving force from below to fill so many fractures veins over such an extensive area.

Shareholders can expect to see quite a bit of news flow and potential for stock catalysts over the next few months.