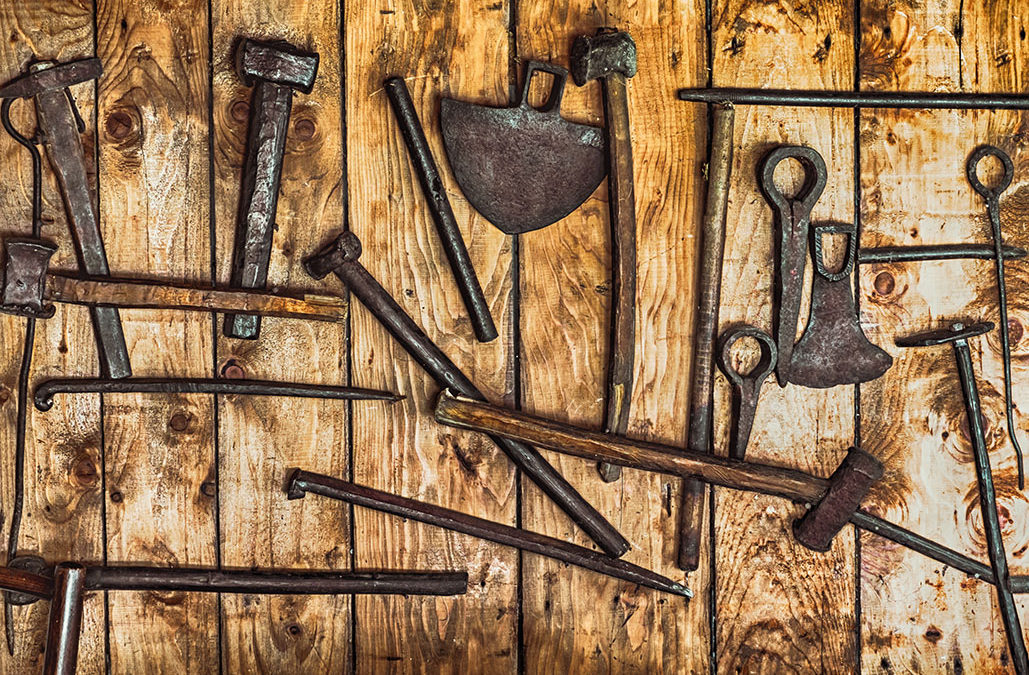 Before the famous Broken Hill ore deposit was first discovered in Australia during the 1880s, few could imagine that such lead-zinc deposits could even exist on Earth.

Since then, it has almost become a “gold standard” in base metals mining, with explorers rushing to every corner of the world to replicate that kind of geological triumph.

One region that has been renowned for its lead and zinc production is Sweden, where companies like Boliden and Canada’s Lundin Mining have enjoyed success for decades.

A junior resource company that recently joined the fold is Boreal Metals Corp. (TSXV:BMX), which set foot in the Scandinavian nation after acquiring the silver-zinc-lead-gold Gumsberg project, along with the Burfjord copper project in Norway, from Eurasian Minerals Inc. (now EMX Royalty Corp.) back in 2017.

Boreal recently began a soil survey on the past-producing Fredriksson mine (Fredriksson Gruva in Swedish), one of the four drill-stage prospects at Gumsberg (see map below). 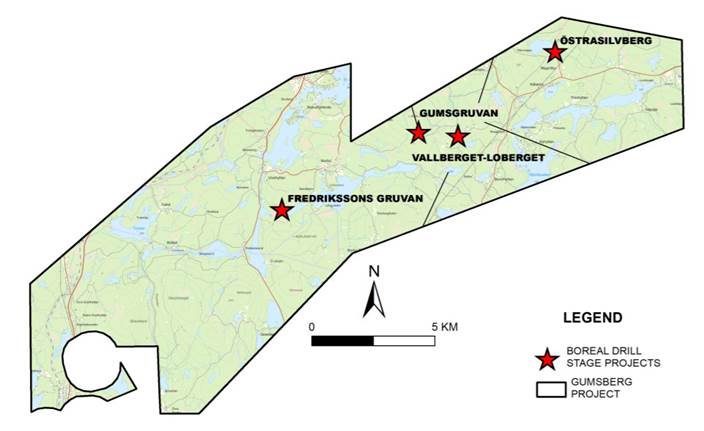 With a private placement and debt financings both secured back in August, the company is now fully locked in and accelerating exploration activities on the Gumsberg property, beginning with the Fredriksson prospect.

Aiming to deliver on the potential of another Broken Hill-type discovery, Varas says his company is committed to advancing the project to the drill-testing stage, along with two other past-producing areas in Östra Silvberg and Vallberget-Loberget.

Thus far, a total of 112 soil samples have been collected at Fredriksson. These were collected at 15-25 cm below the organic horizon across three test lines with an average sample station spacing of 15 m and average line spacing of 100 m, with analysis and results on the way. 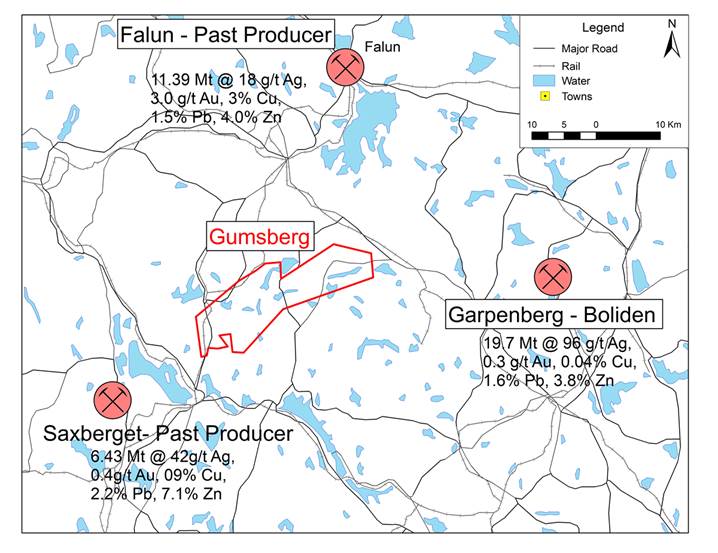 The four holes drilled along the 2 km long Vallberget-Loberget trend in 2016 also intersected significant intervals of mineralization (2.8 m of 17.9% Zn, 6.9% Pb, 0.5% Cu and 68.9 g/t A; and 3.0 m of 9.2% Zn, 3.0% Pb and 12.8 g/t Ag), demonstrating that multiple horizons of exhalative VMS style mineralization are present in the stratigraphy and contain interbedded zones of replacement style mineralization.

The project is situated in the renowned Bergslagen mining district, which has had a rich mining history with activity dating back to as far as the 13th century through to the 1900s.

In fact, the region has hosted over 30 mines throughout the course of history, the most notable of which was the Östra Silvberg mine: the largest silver mine in Europe between 1300 and 1590. However, despite the long-lived production history within the district, relatively little modern exploration has taken place on the Gumsberg property.

The project is also in good company, enveloped between the past-producing Falun and Saxberget mines and what is currently considered the world’s most productive underground zinc mine in Garpenberg, owned by Swedish mining giant Boliden (see figure below). 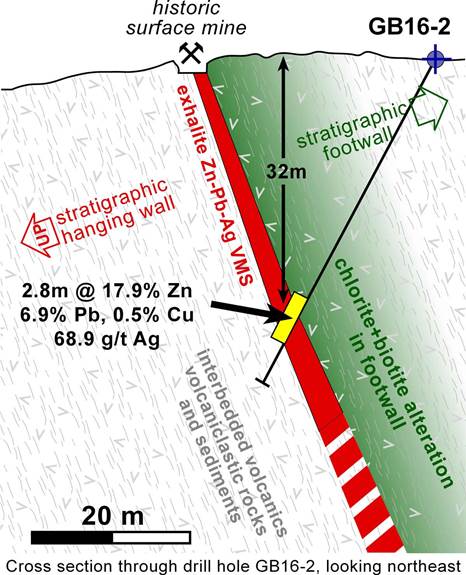 Furthermore, Gumsberg is in close proximity to Lundin’s Zincgruvan mine, which has been in continuous production since 1857.

New geologic interpretations, geophysical surveys and reconnaissance drilling by Boreal and partner Eurasian Minerals have led to the identification of multiple exploration targets, near the historic workings.

More often than not, the future prospects of an exploration project are dictated by its past success.

Boreal later staked the Fredriksson prospect as part of a larger staking acquisition in March 2017. This licence is referred to as “Gumsberg West“ and forms the western half of its Gumsberg project.

As diversification is key to any mining portfolio, the Gumsberg project is not the only project that Boreal is working feverishly to advance.

Exploration is also underway at the company’s Burfjord copper-gold project in Norway, comprising a total of six exploration licenses covering 5,500 hectares. The project is located 32 km west of the Kåfjord copper mines, the first major industrial enterprise north of the Arctic Circle.

Mineralization at Burfjord belongs to the Iron Oxide Copper Gold (IOCG) deposit clan; this portion of northern Fennoscandia is a key IOCG province globally. IOGC deposits are among the most valuable concentrations of copper, gold and uranium ores in the industry. The orebodies can range from around 10 million tonnes of contained ore to 4 billion tonnes or more, with grades of 0.2 to 5% Cu and 0.1 to > 3 g/t Au.

Copper was mined in the Burfjord area during the 19th century, with over 30 historic mines and prospects developed along the flanks of a prominent 4 by 6 km anticline. Boreal believes that many of the rocks in the anticline are intensely hydrothermally altered and contain sulphide mineralization. 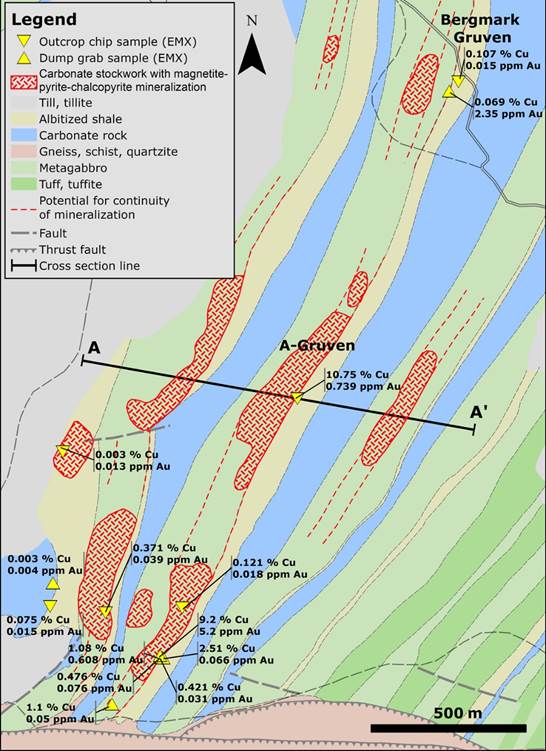 However, only limited exploration has taken place at Burfjord in the modern era. Previous drilling confined to the vicinity of Cedarsgruve mine produced intercepts including 7 m at 3.6% Cu.

“The fact that it was over 30 metres wide gives you a sense there is bulk tonnage potential for a larger deposit,” said Boreal chief Varas when explaining the significance of these results.

“The occurrences you see are expressions of a larger system. The deposit for all I know could be buried and so the idea here is to go and find perhaps one large deposit within all of these areas,” he added.

Though exploration is still at an early stage, Burfjord’s geological and economic potential has not gone unnoticed.

Boreal recently joined forces with Boliden to develop this project together, with the latter agreeing to fund the entirety of the ongoing exploration program with a planned spending of US$6 million over the next four years.

This joint venture would allow Boreal to unlock the potential of its Burfjord project with the technical input and financial backing of one of Europe’s top mining firms. Meanwhile, Boliden would be able to earn up to a majority stake in the project should all pieces fall into place, a win-win situation for all parties involved.

The current exploration program at Burfjord consists of geological mapping focused on the widespread hydrothermal alteration, lithology and structural controls on gold and copper mineralization. It will also entail detailed geochemical sampling, as well as geophysics including EM and a property-wide airborne magnetic survey.

As we enter the fall season, more news will surely be released from Boreal’s exploration programs in the Scandinavian Peninsula, a region no stranger to producing base metals in the past.

The fact that the company has not one but two promising projects in the region warrants the attention of established players in the industry, as seen with the recent Boliden option deal.

More work is yet to be done, but the vote of confidence from an US$8 billion market cap company is certainly a good start.

Richard owns shares of Boreal Metals (TSX.V:BMX). BMX is a paid advertiser on his site aheadoftheherd.com