The results of a 1,458-meter drill program, released on Tuesday, were primarily from the new South Zone Discovery at the past-producing Östra Silvberg mine – a target Boreal has been working since the first quarter of 2018.

Significantly, two of the four holes drilled at Östra Silvberg South Zone Discovery intercepted unmapped mine workings that plunge deeper than expected and further east than indicated by historical maps – suggesting that the mineralization is more extensive than previously thought.

“We are delighted to see that the new Östra Silvberg South Discovery continues to return high-grade silver-zinc-lead mineralization,” said Boreal’s CEO, Patricio Varas, in the news release. He added: “Drilling completed to date on this zone has returned consistent intercepts from below surface to roughly 250 metres. This new discovery at Gumsberg has relatively low density of exploratory diamond drilling and remains open in all directions. We are excited for what further delineation drilling may deliver in the future.”

Some context on Gumsberg is helpful in understanding the progress Boreal Metals has made at this discovery.

The 18,300-hectare Bergslagen Mining District of southern Sweden was mined from the 13th century through to the 1900s, with an astounding 30 historic mines on the property including Östra Silvberg – the largest silver mine in Sweden from 1250 to 1590. Twenty-one holes were drilled between 1939 and 1958.

The Gumsberg project is in good company, located within the Bergslagen Mining District between the past-producing Falun and Saxberget mines, and the active Garpenberg and Zinkgruvan mines.

Boreal’s strategy is to develop VMS projects in old mining districts in Sweden and Norway, that date back thousands of years, as far as the Viking era. 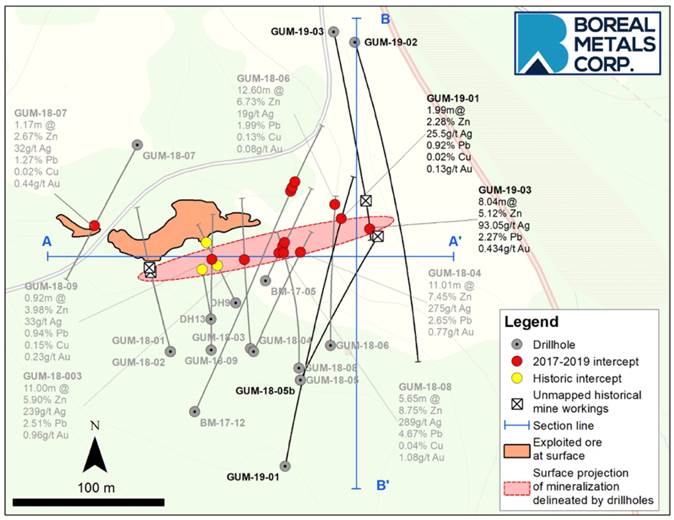 In early 2018, while drilling under the Östra Silvberg mine, Boreal drilled a hole that was so high-grade, the area demanded further investigation. The hole returned about 22% combined lead-zinc, plus well over 600 grams per tonne silver. “In terms of value it’s over $800 per tonne material, or higher,” Varas said in an AOTH video interview this past spring. “So we decided to follow up this year.”

The final assays of a two-month, 1,620-meter drill program were released in March. The results, from the last four of nine holes, built on assays from the first four holes which hit high-grade intercepts in the new South Discovery zone, about 40m south of the old mine workings.

“The grades that we’re getting are terrific, we’ve had some very good continuity over a couple hundred meters of depth, by about 150 meters in strike length,” says Varas.

Drilling at the South Discovery zone continued this past spring.

The geological theory Boreal is operating under, is that the high-grade zinc-silver grades they are finding, look like re-mobilized mineralization that precipitated out of the rocks as they were pushed and pulled during volcanic activity millions of years ago.

The company is also noticing steep “chimney-like structures” at Östra Silvberg that are analogous to the orientation of the deposits found at the nearby Garbenberg mine, some of which go as far as a kilometer deep. 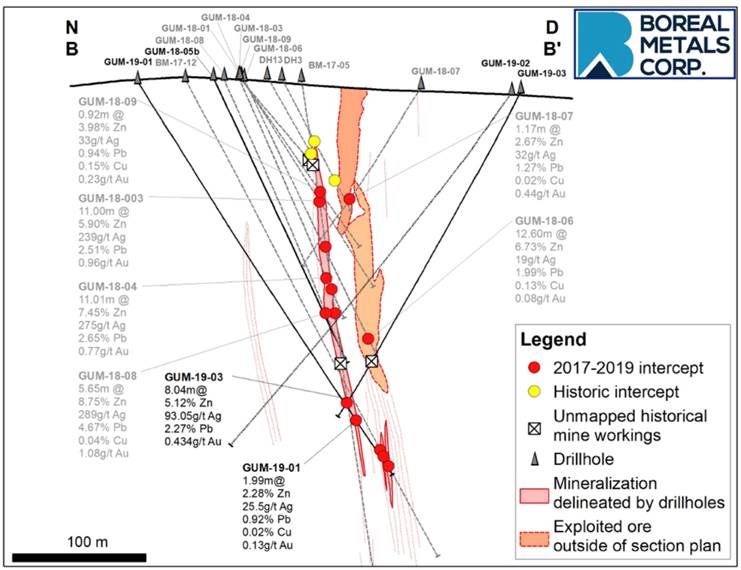 The next step for Boreal is to continue step-out drilling at Östra Silvberg, while also testing drill targets at the Vallberget-Loberget trend, identified in 2016. High-grade zinc (sphalerite) mineralization was discovered there around old surface mine workings, of a style similar to large deposits found elsewhere in the Bergslagen Mining District, such as Lundin Mining’s Zinkgruvan deposit.

Of course, it takes a great mining team to not only discover high-grade VMS but find more of it and expand the mineralization into a deposit. Fortunately, Boreal Metals has the goods.

Patricio Varas, Executive Chairman, has been working in mining for 30+ years and he was a founder of Western Potash, raising over $240 million, he also was instrumental in the discovery of the Santo Domingo Sur deposit in Chile, now being developed by Capstone and was the project manager during discovery at Diavik, a diamond mine operated by RIO Tinto in the Canadian north.

Karl Antonius is a finance professional with a 26-year career in Europe and North America and founded Mandalay Resources Corp., which is now the owner-operator of the Bjorkdal gold mine in Sweden, and initial financier of the Viking Resources’ Svartliden gold mine.

Boreal has a strong technical team which includes Eric Jensen and Dan MacNeil.

Daniel McNeil, Vice President of Exploration, is a precious and base metal specialist with over 16 years of experience with continental-scale project generation to in-mine resource expansion, in a wide variety of geological settings throughout the Americas and Eastern Europe.

Boreal has recently brought in former Boliden Management which is very unique for an exploration company. Thomas Söderqvist, Director, and Rodney Allen, Techincal Advisory Committee, were both senior management of the largest mining company in the region.

Thomas Söderqvist started as an underground miner at Boliden at the age of 18 and had an impressive mining career leading him to becoming number four at Boliden, as Senior Vice President, and in December 2018 was the acting CEO at Boliden.

Rodney Allen is an economic geologist with nearly 40 years of experience, specializing in the geology of complex ancient volcanic regions.  Throughout his 40 year career he was Head of Exploration at Boliden and is credited withh reviving the Garpenberg VMS mine (near Boreal’s Gumsberg Project).

Garpenberg was near closure with ore reserves running low, but over four years, four new satellite deposits were discovered. Thanks to Allen, Garpenberg’s reserves were lifted from a few million tonnes to 36MT, plus resources of 38MT and production of 42MT, for a total of 116MT by the end of 2013. The four discoveries were the basis of an expansion project in 2014 that nearly doubled Garpenberg’s annual production.

Boreal stands out as a company with huge exploration potential, and the company is knee-deep in mining experience. Director Jensen is a PhD geology with tons of projects under his belt, and he has country experience. He knows the Sweden portfolio back to front while with EMX, where he is the General Manager of Exploration. Patricio Varas and Karl Antonius are mining veterans who know what it takes to move projects forward both technically and financially. We also like that the board has brought on Thomas Söderqvist, who has worked for Boliden as a top executive.  Söderqvist not only knows the territory (Boliden’s Garpenberg mine is close to Gumsberg) he has drilling supplier expertise.

This article is copyright protected and may not be reproduced in whole or in part or retransmitted or reposted without the authors written permission.