Asset investing in Freegold and Cypress

Are you a speculator or an investor?  A lot of people new to resource investing see the sector as a giant casino, where placing a bet on one of hundreds of penny-stock exploration companies is the equivalent of rolling the dice at the MGM Grand.

Most have heard the well-worn industry phrase, “only one in a thousand exploration companies will bring a discovery to production”. With such low odds of success, why would anyone risk their hard-earned investment capital on a 1 in 1,000 moon-shot? The answer is your speculating knowing the money is made on promotion this early in the life-cycle of a junior.

Fortunately, there is a better way, and that is asset investing. Asset investing in mining refers to a belief that the asset under consideration, ie., a company’s exploration project(s), will appreciate in value over time, by travelling down the development path towards a mine. Your investing looking for the holy grail, that billion-dollar buyout of an asset so good somebody will buy it.

The point when a junior mining company shareholder begins buying, or holding their existing shares, backed by a strongly held, well-researched conviction that his/her junior has that buyout potential, is when the shareholder turns from speculator to investor.

Only you can decide the level of risk you can tolerate and how much patience you have to sit while developments, the story, plays out.

The most upside (and by far the greatest risk) comes from buying a junior when they are exploring and make an initial discovery. Great drill assay results can send a junior’s share price skyrocketing. The reverse can also be true. Junior explorers, the greenfield plays, are the riskiest by far. Strike out on assay results and it could be goodbye to a share price rise for a very long time – until the company finds another project they can work on. If you’re buying into this kind of play make sure the company has another fallback project in its portfolio.

I always own one or two greenfield, early-stage explorers, but my favorite-stage junior is in the post-discovery resource definition stage (also known as brownfield companies). These companies have already found something, the share price has settled back after the initial discovery, and the company is going in to see what they have and hopefully produce an NI 43-101-compliant resource estimate to build upon. The risk has been greatly reduced, the waiting time for a discovery non-existent, and the reward very nice considering the much lower amount of risk.

Think of an investment in a junior mining play as a journey, from high-risk speculation to low-risk investment. The milestones in getting to the destination are a series of de-risking events made possible by exploration, which most often includes taking soil or rock chip samples, conducting geochemical or geophysical surveys, and diamond drilling, the ultimate “truth machine” that either confirms or denies geological theories.

These milestones start with an initial discovery, with more drilling lead to a maiden (first) resource estimate, and are followed by a series of economic/ technical studies, including a PEA, prefeasibility study and feasibility study.

The point here is not that juniors are risky investments. It’s that a great deal of the risk can be taken out of them, through exploration and the completion of assessment/ study milestones that serve to prove the geological model and the extraction plan for getting the resource to market.

To review: When investors believe enough risk has been removed from their investment, that they become confident in the long-term viability of the company, the asset, and the metal in the ground, a speculative bet on a mining company becomes a long-term investment.

Does asset investing in mining work? You bet it does, look at Kirklake Gold (TSX:KL) and Great Bear Res (TSX.V:GBR). At least two of our wins so far this year have been in companies where investors have entered the stock based upon a belief that there are viable assets being developed. 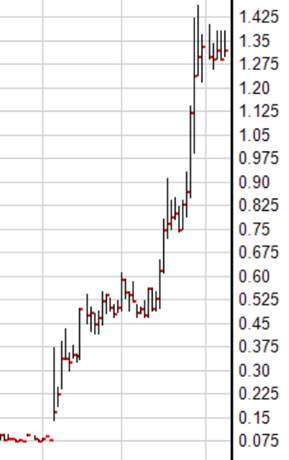 I took a position in Freegold Ventures, whose Golden Summit property is near Kinross Gold’s Fort Knox mine in Alaska, at $0.49 a share. As of this writing, the stock is trading at $1.31/sh, delivering a tidy 167% profit in just over a month.

Allow me to explain:

Most of the modern-day exploration at Golden Summit has focused on the Dolphin stock, an intrusive deposit nearly identical to Kinross’s Fork Knox deposit 5 kilometers to the southeast.

Freegold is obligated to quote this PEA until it is updated which is nothing to sneeze at with 2.947 million ozs at the PEA stage. However, an earlier resource estimate published in August 2013 that was not pit-constrained, showed just how big the Dolphin Stock is.

In the indicated category there are 79.8 million tonnes of 0.66 grams per tonnes gold and a whopping 248 million tonnes at 0.61 grams gold in the inferred category using a 0.30 g/t gold cut off. Global project resources are 1,683,000 indicated and 4,841,000 ozs of gold for a combined 6,524,000 ounces of gold. And the deposit is still open in several directions for additional growth.

Hole GSDL 2002 was started 150 meters east of GSDL 2001 towards the Cleary mine. The first 9m of the zone ran 2.4 grams per tonne gold. Then covid-19 precautionary measures were enforced, shutting the drill down. Drilling GSDL restarted almost two weeks ago.

Hole GSDL 2002 could provide the confirmation that Freegold is on the brink of unlocking the incredible value of the Golden Summit property.

At Ahead of the Herd we believe Freegold has an already large asset of considerable value. An asset whose value continued to grow with hole GSDL 2001, and coud continue to grow with results from Hole 2002 and further drilling. 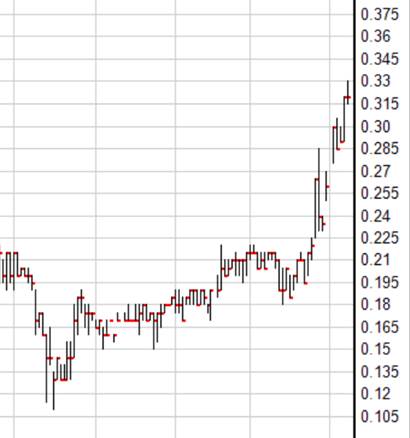 It’s a bit of a different set-up for Cypress Development Corp. Here a high-risk speculation play has evolved, over the past three years, into a lower-risk asset because of the long-term merits of the project – something we at AOTH have recognized from the beginning.

CYP started to move in 2017 with the commencement of drilling at its Clayton Valley Lithium Project in Nevada. The stock moved higher in November 2017 on first assays showing a large mineralized area with high lithium grades; on the maiden resource estimate delivered in April 2018; and around the time of the PEA, released in the fall of 2018.

Since reaching a five-year high of $0.38/sh, however, many investors exited their speculative positions, and without an exciting catalyst to bring them back, Cypress shares have floated along, trading within a fairly tight band of $0.17 and $0.22, until the release of a blockbuster prefeasibility study in May of this year. Between the prefeas and some high-grade hits in the area Cypress has designated for its +40-year lithium mine, Cypress has nearly doubled from 18 cents on March 1 to its current $0.32.

I’ve been in a lot longer, and my patience is being rewarded. Having taken a position at $0.10 in July, 2017, I’m now looking at a triple. Not that I’m planning on selling anytime soon; imo, this stock could have some very serious catalysts coming deserving it a further re-rating in the market.

Cypress could be a perfect example of what can happen to a share price when speculation turns asset investing. The prefeasibility study and all the hard work that went into the metallurgical studies by Dr. Bill Willoughby, CEO, are beginning to pay off.

Production at the Clayton Valley Lithium Project is based on a Probable mineral reserve of 222 million tonnes averaging 1,141 parts per million (ppm) lithium (1.353Mt LCE). The project ranks among the largest undeveloped lithium deposits in the world.

At a cash operating cost of $3,329 per tonne LCE, the company stands to make a profit of $6,421/tonne, if lithium sells for $9,750/t. And that does not include extra revenue earned from the sale of (excess) sulfuric acid, needed to leach the lithium from the claystones, excess power generated from the acid plant and sold into the electricity grid, or revenues from rare earth oxides that were identified during previous metallurgical testing. As stated in the PFS, Rare earth elements (REEs) were found at elevated levels in the lithium recovery process along with Mg, Ca and other elements.

Cypress’ Clayton Valley Lithium Project has the size in its PFS already, to interest a large company or fund, and has the resources to be scaled up to produce more.

In the three years I’ve been covering Cypress, the business plan has always involved attracting a major financial or mining partner that can help drive the project forward.

Dr. Willoughby told us, “We want to find a partner to help us reach the next level. It could be a fund or financial backer, another miner, or government entity, we’re going to explore all those options.”

Does he have somebody in mind?

Albemarle is the world’s largest lithium producer; its Silver Peak mine is next door, but Silver Peak has been operating since the 1960s and its grades have dropped considerably. It needs a new source of lithium to extend the minelife. Tesla is the largest EV manufacturer; its Gigafactory is just 200 km away from CYP’s Clayton Valley Lithium Project. There are other suitors too, that might be interested in securing a +40-year lithium mine in the United States. SK Innovation, Mercedes Benz, Volkswagen, Ford or GM are all possibilities.

The next step is proof of concept. The purpose of the pilot plant is proving, in a real-world application, everything that Cypress has done so far in a laboratory. It’s showing to everyone that its technology works, on a commercial scale. After that, it’s on to a feasibility study – another major milestone in Cypress’ path to production.

For those with lots of geological knowledge – or just as important, access to this geological know-how through a newsletter subscription like Ahead of the Herd – it is possible to significantly reduce your risk exposure and turn a speculative play into a long-term investment, or vice versa.

Richard owns shares of both Freegold Ventures (TSX.V:FVL) and Cypress Development Corp (TSX.V:CYP). FVL is a paid advertiser on aheadoftheherd.com