The drill program at Aben Resources’ (TSX.V:ABN) Forrest Kerr property is looking promising. After only two weeks of drilling, the Vancouver-based company put out a news release on Monday saying that the drills have already intersected mineralization on the first five holes at the North Boundary Zone. 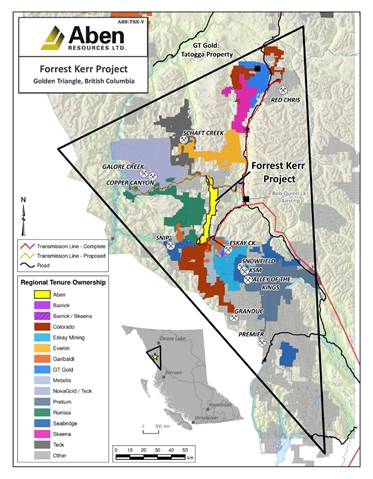 The highlight of the news release is this statement:

These holes have transected rock that has been strongly altered with quartz-sericite-pyrite with variable chlorite and strong calcite and hematite throughout. The pervasive nature of the alteration is evidence toward the strength of the hydrothermal system that operated through time in this part of the Property. Several fault and shear zones have been encountered in each hole, which have been interpreted and observed as the likely host to Au-Ag-Cu mineralization.

The goal of this year’s 5,000m diamond drill program is to expand the mineralization at the Boundary North Zone. According to Aben, this part of the Forrest Kerr property hosts gold-silver-copper in rock and soil anomalies that span over 2 km by 4 km and remain relatively under-explored. The zone’s mineralization remains open in multiple directions with numerous soil geochemical anomalies and geophysical targets currently being drill-tested.

Talking to Aben’s CEO, Jim Pettit on Monday, Ahead of the Herd learned that while the core has yet to be assayed, indications are that the rocks hit by the drills so far contain the minerals quartz-sericite-pyrite, along with chlorite, calcite and hematite. The sericite is particularly important because it’s evident of a sulfide gold system – gold-bearing veins are usually accompanied by strong alternations in the wall rocks characterized by quartz, sericite and chlorite, along with abundant pyrite and arsenopyrite.

This compares to the mineralization at Boundary North last year, which was predominantly chalcopyrite, the mineral from which copper is extracted. High percentages (or tenors) of chalcopyrite often contain high-grade gold.

Of key importance in the Golden Triangle area of northwestern BC where Aben is exploring, is that the gold often is not visible in the core. It has to be assayed to determine how much gold is actually there. Pettit gave the example of the giant Eskay Creek Mine, where geologists re-did holes known to contain chalcopyrite, the copper source mineral, only to find the area was awash with gold. Another example is GT Gold. Last year GT Gold was using chalcopyrite to help guide their exploration program. Aben noticed they also had massive amounts of chalco in their core, but didn’t see any gold. When they assayed it, the core came back with some exceptional gold (and silver and copper grades), as mentioned above.

As far as what could be happening structurally, Pettit said Aben is going to continue to follow the theory, outlined in our Abens boots, hammers, smoke and fire article, that the system could extend uphill where a hole drilled in the “Blind Fault” zone encountered high-grade silver – 25 grams per ton over 40 meters and 14 g/t over 120 meters. The question is whether the two zones meet.

What’s encouraging is that Aben, with only five holes drilled, is discovering more sub-faults, or splays, of varying widths, coming off of the main Kerr fault – a 40-km-long trend that transects Forrest Kerr.

These splays act as conduits and are known to host mineralization, sometimes with bonanza grades.

“The bottom line is that in that area there’s all kinds of things going on. We’re getting a lot of deviation or deflection in the drill (the drill moves a few degrees) because there are so many sub-faults you go through,” said Pettit, adding:

“The Boundary North zone was pretty well defined to a certain depth and then all of a sudden you’re getting lots of faulting going on. We could probably end up with multiple intersections, and you just hope they all tie together.”

Whereas most of the drilling last year was in brecciated (broken fragments of rock) ground, the hope is that something more solid and structural will be found, indicative of a large hydrothermal system.

The drill core from the five holes has been sent to the assay labs and final geochemical assays are pending. Up to 20 holes are expected to be drilled by end of summer, with the goal being to get a better understanding of the Boundary North Zone.

I’m keeping a close eye on Aben’s drilling program and I can’t wait to see how the assays on the first five holes pan out. Stay tuned.