Aben drills pointing at Justin for start of 2019 exploration

May is the month when junior resource companies either spring out of hibernation from a winter spent poring over last year’s results, secure in the knowledge their treasury is in good shape, or return from cash-raising junkets, hopefully with pockets jingling – in order to prepare for summer drill programs.

In the case of Aben Resources (TSX-V:ABN) it’s the former. The Vancouver-based company is dedicating $1 million towards an exploration program at its Justin project in the Yukon, which butts onto Golden Predator’s (TSX-V:GPY) 3 Aces property. 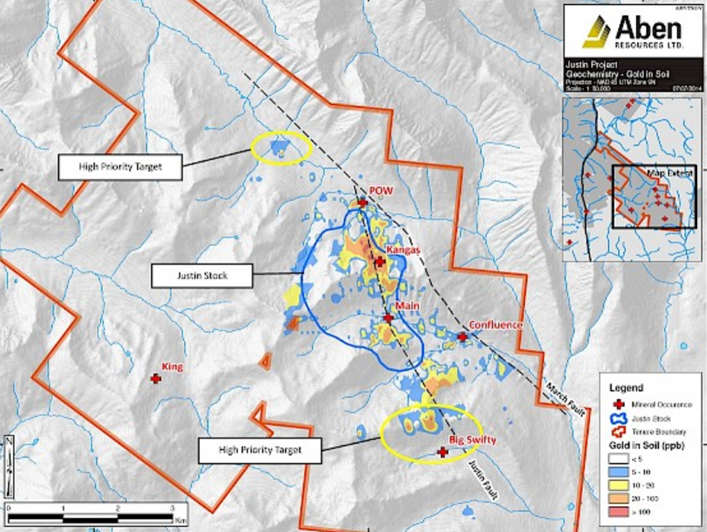 There will also be a renewed focus this summer on Forrest Kerr, located in BC’s Golden Triangle between the past-producing Snip and Eskay Creek mines, where Aben is planning an initial 5,000m of drilling to follow up on last year’s expansion of the North Boundary Zone. The company has the opportunity to execute on a number of targets thanks to the authorization of 55 new drill pad locations versus just nine in 2018, which limited the amount, and angle, of drilling. 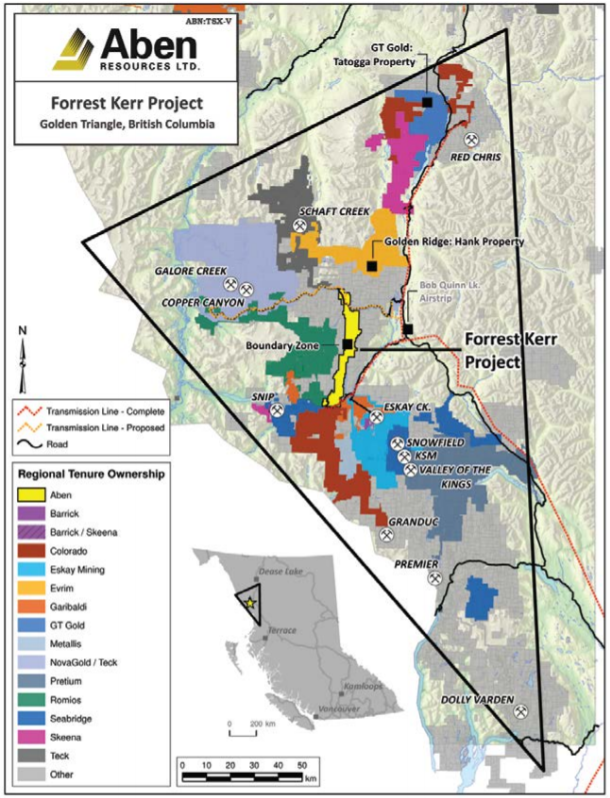 Aben Resources is planning on getting an extra month of drilling in at Justin by starting in early June. The 2,000m drill program will involve 1,350m of diamond drilling and 600m of rotary air blast drilling.

“It’s a classic intrusion-related gold system. You’ve got this younger intrusion coming up into the area, and it’s a massive area. Generally, you would get bulk tonnage from those,” CEO Jim Pettit said in a 2018 AOTH interview, comparing it to Kinross’ 4.3 million-ounce Fort Knox operation in Alaska, Golden Predator’s Brewery Creek mine, and the Coffee gold deposit in the Yukon. The latter owned by Kaminak Gold was acquired by Goldcorp in 2016 for CAD$520 million.

In 2017 ABN discovered the Lost Ace Zone which is just west of the POW Zone. The gold-bearing vein system occurs in a geological setting that is very similar to mineralization present on Golden Predator’s 3 Aces project, located immediately northwest of the Justin claim group.

A 3.8-kg bulk soil sample collected for gold grain count analysis and classification from a location 115 meters upslope from Lost Ace returned 1,135 visible gold grains. Of the 1,135 gold grains recovered, 1,049 were classified as pristine – meaning the gold mineralization was likely carried to surface by the magma intrusion. As seen from the image below, the gold grains are jagged and flat versus smooth/ round, indicating the gold has remained in place and not moved anywhere. 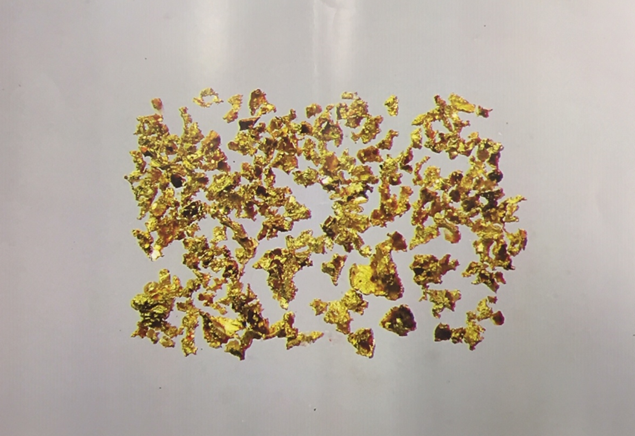 Last summer Aben completed a trenching program at Lost Ace whose results were posted in January 2019. The series of 250m-wide trenches delivered samples of mineralization that are remarkably similar to 3 Aces.

According to Aben’s news release:

“The new discovery at Lost Ace highlights the existence of a multi-phase hydrothermal system with the potential for overprinting mineralizing systems.”

Overprinting occurs when rock of different ages is jumbled together, meaning younger rock can end up on top of older rock.

That would explain the two distinctly different types of mineralization found at Lost Ace. Pettit explains:

“I think these two systems could be associated, where what we’re seeing at surface, is more like an orogenic high-grade vein system, brought up possibly from the uplifting of the older quartz veins by the younger magma intrusion. It could be some sort of an enriching event.”

To test that theory, Aben will bring in a rotary air blast (RAB) drill, a small, mobile unit that can explore the 250m area – likely punching in about 20 holes, 50m deep. A diamond drill will follow up on the property’s best targets.

Up to 10 holes (1,350m) of drilling is planned for the POW Zone, to further test the intrusion-related gold system discovered in 2010.

Exploration work at Justin is expected to take three to four weeks. After that, Aben will pivot west, to British Columbia’s highly-prospective Golden Triangle.

Fast forward to last summer, when Aben hit a discovery hole early in the drilling season, by positioning the drill 35m northwest of the three 2017 holes (the North Boundary Zone) to investigate the possibility of mineralization at depth.

Guided by chief geologist Cornell McDowell, Aben decided to test new ground 1.5 km south of the North Boundary Zone, going by soil geochemical anomalies and “elevated gold in rock and soil values that are coincident with an historic electromagnetic (“EM”) conductive geophysical anomaly,” the company stated in a news release. 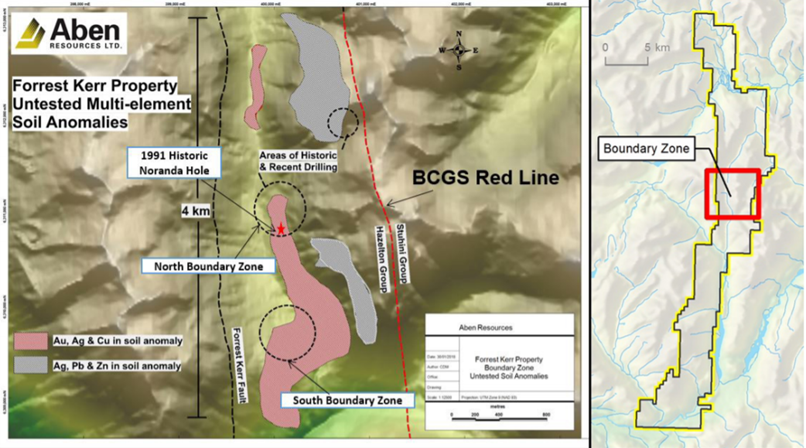 Moving down the drainage, the drill crew tapped into mineralization that appeared similar to the three holes that defined the North Boundary Zone ie. containing ample chalcopyrite – the copper mineral – and gold pathfinder minerals.

This year, Aben has three objectives for the 23,000-hectare Forrest Kerr property running along the Kerr fault, which acts as a major geological “engine” for the whole region, giving Aben tremendous discovery upside due to the amount of geological activity in the area. 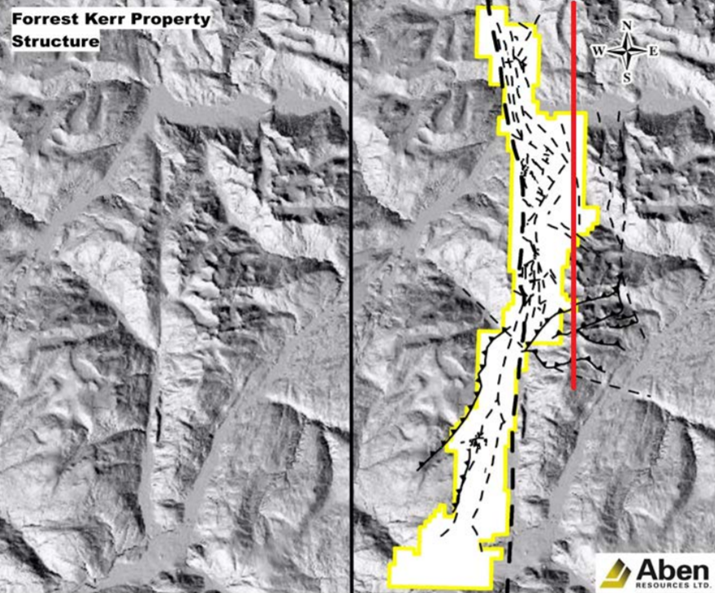 The first goal is to see whether the North Boundary Zone can be extended in a northerly direction. Aben’s news release details the work plan:

Drill activities will begin at the Boundary Zone in late June, where over 12,000 meters of drilling were completed in 2017 & 2018. North Boundary has previously returned high-grade results such as 38.7 grams/tonne (g/t) (1.12 oz/t) gold over 10.0 m (from 114.0-124.0 m) including 331.0 g/t (9.65 oz/t) gold over 1.0 m in hole FK18-10. Drilling to date has shown that mineralization extends several meters outboard of the high-grade area within subordinate shear structures and vein arrays. Due to the availability of new pad locations specific areas of interest will be revisited. Initially drill testing will focus on the potential for a northward extension of the high-grade mineralized core at North Boundary originally defined by holes FK17-4, 5 and 6 and confirmed with holes FK18-10 & 11.

Next, drill crews will follow up a high-grade hole 200m south of the North Boundary Zone. Encountered by Noranda way back in 1991, the highlight was an eye-popping 326.0 g/t Au.

Aben also wants to know more about the newly discovered South Boundary Zone, where broad intercepts of gold-copper-silver-zinc mineralization were found in quartz veins last summer. This is the third objective.

An airborne magnetic survey will be run across the entire Boundary Zone, prior to drilling. The survey is aimed at gleaning more information about Forrest Kerr’s large, complicated structures.

Finally, the company plans to drill-test a previously identified target in the Forrest Zone, located 13 km south of Boundary. According to Aben, “The area of interest at Forrest is defined by highly anomalous gold-in-soil and gold-in-rock values coincident with a strong geophysical conductive anomaly originally reported in 2013.”

For an overview of Aben’s exploration program this summer, view an AOTH video featuring Aben’s President and CEO, Jim Pettit.

In early 2018 my readers were given an opportunity to get into ABN at a very good price ($0.15). They had ample opportunity to ride the stock into the high $0.40’s, to reap their rewards along the way up, and on the way down as the top was recognized.

When Aben fell back to $0.115 in January of this year I said I liked it again. On Friday the stock closed at $0.20. Now that we have a detailed plan for this summer’s exploration activities, I remain a strong ABN fan. But before I recap let me add a little context here.

Raising money for exploration in the junior resource market right now is difficult, to put it mildly. According to Oreinc, a Vancouver-based research and advisory firm, Canadian-listed mining companies are raising less money and inking fewer deals.

As reported by the Financial Post, Oreinc tracked around 1,400 Canadian mining companies between $100 million and $1.5-billion valuations. It found that in 2018, cannabis companies raised $4 billion versus $217 million by mining companies.

What does this mean for gold exploration? Well, as financings dry up, so does the exploration pipeline. Companies that would normally be out there kicking rocks, sampling, drilling and drumming up shareholders, are in a holding pattern, waiting for the market to come back.

One company that is not waiting for the tide to change is Aben Resources.

Consider this: Aben has two excellent properties in areas that have seen a lot of historic exploration. Justin is a sleeper play that holds great potential, in our view. Will the drills confirm the existence of an intrusion-related gold system yielding high grades and tonnage? It certainly seems likely, if the results from the bulk soil sample and trenching are a guide.

At Forrest Kerr, the mineralogy is complicated, but Aben is gradually filling in the blanks. How big is the North Boundary Zone? Is it connected to South Boundary? These are puzzles that Aben hopes to solve. The answers are sure to provide plenty of news flow for Aben investors to realize some nice share price gains.

Aben is one of the few junior companies that is already fully cashed up (+Cdn$4m in the treasury) and ready to commence two major exploration programs. The company will be on its Yukon project, Justin, in very early June, possibly just a week away. And from there, roughly the start of July, drilling on its Golden Triangle project Forrest Kerr.

Both programs are capable of delivering high grade to jewellery box grade gold assays. Being cashed up and ready to get to drilling means first out of the gate advantage in the race for investors dollars. And because of a sector wide cash crunch not many juniors are going to be able to deliver as much news as Aben, that makes Aben a top pick AOTH pick in the gold sector.