Aben done drilling at Justin, moves on to Forrest Kerr

Aben Resources Ltd (TSX-V:ABN, OTCQB:ABNAF, FSE:E2L2) has completed the first phase of its 2019 exploration program and started the second, as the cashed-up gold junior tries to stack up more evidence to prove geological theories at its two flagship properties, Justin in the Yukon and Forrest Kerr in British Columbia.

Western Canada-focused Aben has $5 million in its treasury – ample working capital for a company its size – and budgeted $1 million to its Justin project, which butts onto Golden Predator’s (TSX-V:GPY) 3 Aces property.

At Forrest Kerr, located in BC’s famed Golden Triangle, Aben is planning an initial 5,000m of drilling to follow up on last year’s expansion of the North Boundary Zone. The company has the opportunity to execute on a number of targets thanks to the authorization of 45 new drill pad locations versus just nine in 2018, which limited the amount, and angle, of drilling. The drilling budget may double to 10,000m, depending on what is found at the mountainous, structurally-controlled project, lying equidistant between the past-producing Snip and Eskay Creek mines. 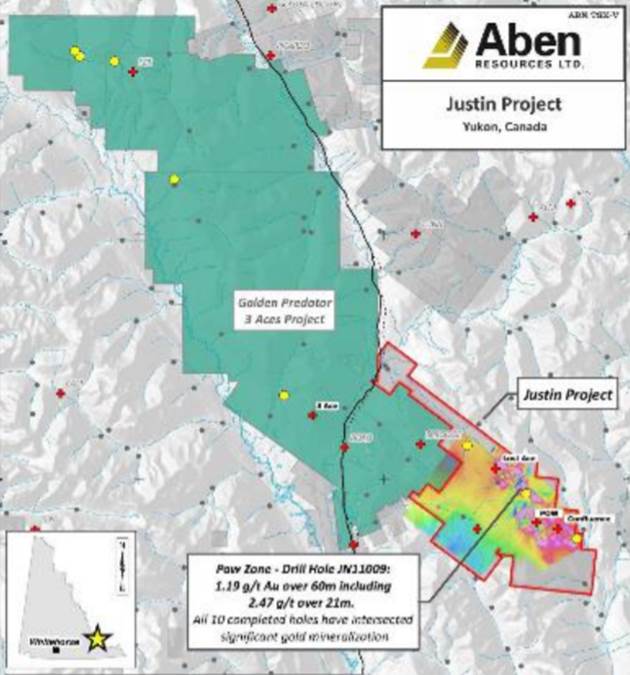 In 2017 ABN discovered the Lost Ace Zone which is just west of the POW Zone. The gold-bearing vein system occurs in a geological setting that is very similar to mineralization present on Golden Predator’s 3 Aces project, located immediately northwest of the Justin claim group. 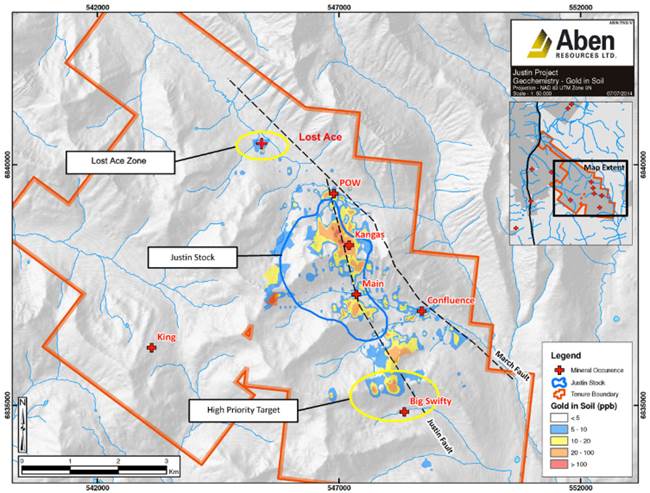 A 3.8-kg bulk soil sample collected for gold grain count analysis and classification from a location 115 meters upslope from Lost Ace returned 1,135 visible gold grains. Of the 1,135 gold grains recovered, 1,049 were classified as pristine – meaning the gold mineralization was likely carried to surface by the magma intrusion.

Last summer Aben completed a trenching program at Lost Ace whose results were posted in January 2019. The series of trenches along a 250m-wide strike length delivered samples of mineralization that are remarkably similar to 3 Aces.

Aben is following the theory that a younger intrusion broke through the older country rock, resulting in high-grade skarn gold mineralization at surface, and the yet-to-be proven intrusion event underneath.

Understanding this requires some geology.

Intrusion-related gold systems are a type of gold deposit that often occurs in continental settings. They are significant sources of gold but can also contain other metals like copper, tin and lead. Intrusives are different from orogenic gold deposits which form when the earth’s plates collide or pull apart. Intrusives form when parts of the earth’s mantle are heated as it cools, resulted in the deposition of minerals. Intrusive mineralization can include skarns, replacements, disseminations and veins.

An intrusion isn’t necessarily high-grade but it is often high tonnage, and bulk-mineable. At Justin’s POW Zone, drilled in 2011-12, the mineralization has all the hallmarks of an intrusion event, with lower grades typical of that environment, for example 60 meters at 2 grams per tonne.

“It’s a classic intrusion-related gold system. You’ve got this younger intrusion coming up into the area, and it’s a massive area. Generally, you would get bulk tonnage from those,” Pettit said in a 2018 AOTH interview, comparing it to Kinross’ 4.3 million-ounce Fort Knox operation in Alaska, Golden Predator’s Brewery Creek mine, and the Coffee gold deposit in the Yukon. The latter owned by Kaminak Gold was acquired by Goldcorp in 2016 for CAD$520 million.

As evidence, consider that two different styles of mineralization have been found at the Justin Project, described by Aben in a January, 2019 news release:

“Mineralization at Lost Ace is interpreted to be orogenic-style quartz-gold veins that bear a strong resemblance to and share similar geologic setting with Golden Predator’s adjacent 3 Aces Property. Previous exploration at Justin has successfully discovered Intrusion related sheeted veins & vein breccias along with gold bearing skarn mineralization. The new discovery at Lost Ace highlights the existence of a multi-phase hydrothermal system with the potential for overprinting mineralizing systems.”

Overprinting occurs when rock of different ages is jumbled together, meaning younger rock can end up on top of older rock. That would explain the two distinctly different types of mineralization found at Justin.

“I think these two systems could be associated, where what we’re seeing at surface, is more like an orogenic high-grade vein system, brought up possibly from the uplifting of the older quartz veins by the younger magma intrusion. It could be some sort of an enriching event.”

To test that theory, Aben brought in a rotary air blast (RAB) drill, a small, mobile drill that explored the Lost Ace Zone – punching in 17 holes, on average 35m deep, along with four holes at POW.

A diamond drill will follow up on the best targets, after RAB drilling results are returned, likely within the next few weeks.

It will be interesting to see whether the results from the RAB drilling show deeper mineralization associated with earlier trenching. Pettit is especially interested in RAB holes drilled close to the POW Zone, which is the zone most likely to build a resource from, combined with the orogenic gold found at Lost Ace.

“It’s leading in that direction, we’ll know when we get results back how close we are to hitting that theory,” he told AOTH in a phone interview, Friday. “When that intrusion happened it brought older lithologies up closer to surface, it could’ve been a remobilization of fluids. That could affect the POW Zone positively as far as grade. It remains to be seen.”

As part of the Justin exploration program, Aben drilled 963 meters into the POW Zone where gold-bearing vein, breccia and skarn replacement mineralization has been proven by surface sampling and recent drill programs (60m grading 1.19 g/t Au in drill hole JN11009). The 2019 POW drilling sought to evaluate the potential to host bulk-tonnage gold mineralization and to test for the continuity of higher-grade skarn mineralization along strike. All four diamond drill holes encountered sulfide mineralization and have been sent off for analysis.

Aben was interested in the 23,000-hectare Forrest Kerr land package because of the Kerr fault – a large structural feature that the company theorizes may be a significant control feature and gold source for Golden Triangle plays.

Just inland from the Alaska panhandle, the area has been the site of three gold rushes and some of Canada’s greatest mines, including Premier, Snip and Eskay Creek. Other significant and well-known deposits located within the Triangle include Brucejack, Galore Creek, Copper Canyon, Schaft Creek, KSM, Granduc, and Red Chris. 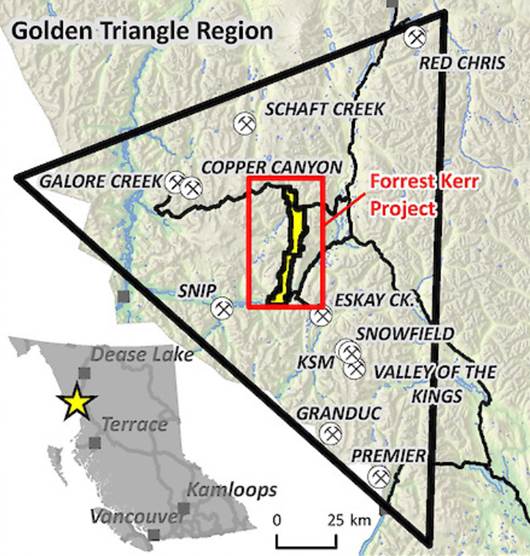 The Snip Gold Mine produced a million ounces in the 1990s at an eye-popping average grade of 27.5 grams per tonne. Eskay Creek was Canada’s highest–grade gold mine and the world’s fifth largest silver producer, with production well over 3 million ounces of gold and 160 million ounces of silver.

But after this amazing rush of discoveries the Golden Triangle, at least news and investor interest-wise, seemed to go dormant; isolated from major infrastructure, the area was expensive to conduct sampling, surveys and drill programs, and due to its harsh winter climate, only accessible for half a year. The resurgence of interest in the Golden Triangle is being driven mostly by new road and power infrastructure built by the BC government, and the opening of Pretium’s Brucejack mine in the summer of 2017.

Aben’s 50-kilometer-long Forrest Kerr project runs beside and transects the Kerr fault, which acts as a major geological “engine” for the whole region, giving Aben tremendous discovery upside due to the amount of geological activity in the area.

The fact that the Kerr fault – a 40-region trend – transects Forrest Kerr is important, because it divides the Mesozoic stratigraphy (rock layers) to the east from the older Paleozoic stratigraphy to the west. The fault acts as a conduit for the hydrothermal fluids that rushed towards the surface due to volcanic activity. 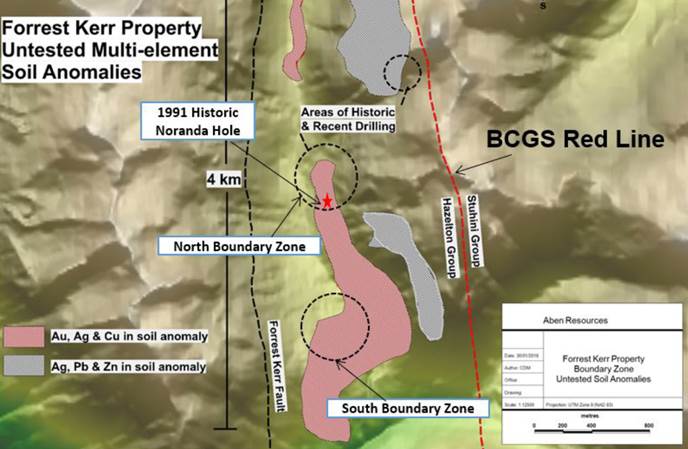 Last summer Aben hit a discovery hole early in the drilling season, by positioning the drill 35m northwest of the three 2017 holes (the North Boundary Zone) to investigate the possibility of mineralization at depth.

This year, Aben has four objectives for the 23,000-hectare Forrest Kerr property.

Aben also wants to know more about the newly discovered South Boundary Zone, where broad intercepts of gold-copper-silver-zinc mineralization were found in quartz veins last summer. This is the third objective.

Finally, the company plans to drill-test a previously identified target in the Forrest Zone, located 13 km south of Boundary. According to Aben, “The area of interest at Forrest is defined by highly anomalous gold-in-soil and gold-in-rock values coincident with a strong geophysical conductive anomaly originally reported in 2013.”

To date, drilling at Aben has targeted near-surface, high-grade gold and copper mineralization. That has yielded some nice intersections, and backed by the market with two separate stock runs for ABN in 2017 and 2018.

An airborne magnetic survey was run across the entire Boundary Zone, prior to drilling. The survey was aimed at gleaning more information about Forrest Kerr’s large, complicated structures.

Pettit told us on the phone Friday that the current +5,000m drill program at Forrest Kerr has the over-riding objective of identifying these deeper structures. One possibility is a copper-gold porphyry, a type of mineralization northern BC is famous for. But not necessarily.

“The gold has to come from somewhere,” he said. “When you’re drilling you want that confidence you can see the structure and follow it. It may hydrothermal or may not be a porphyry. It depends on the alteration but the drilling is going to give us a better definition of finding something that holds together.” CEO Pettit added: “What we’re seeing in North Boundary is awesome.”

Aben has two excellent properties in areas that have seen a lot of historic exploration. Justin is a sleeper play that holds great potential, in our view. Will the drills put truth to the existence of an intrusion-related gold system yielding high grades and tonnage? Results from the recently-completed RAB and diamond drilling will surely provide some clues.

At Forrest Kerr, the mineralogy is complicated, but Aben is gradually filling in the blanks. How big is the North Boundary Zone? Is it connected to South Boundary? What do the mineralized structures look like at depth? These are puzzles that Aben hopes to solve. The answers are sure to provide plenty of news flow for ABN investors to potentially realize some nice share price gains, over the next couple of months.